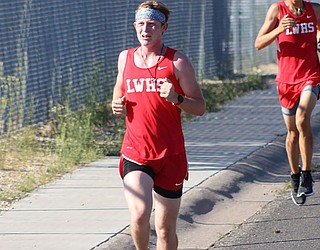 KINGMAN – The Lee Williams High School cross country team was without a number of runners due to the ACT test, but that didn’t stop the Vols and Lady Vols from taking second at the Ray Gomez Invitational in Bullhead City.

Jacob Peterson was the next Vols finisher in 14th at 18:29.46, followed by the Kingman High trio of Xavier Rodriguez, Jacob Hamblen and Jack Snow in 15th, 23rd and 25th, respectively.

Tyler Davison was the top Kingman Academy finisher in 33rd.

All three local squads are back in action at 4 p.m. today at Lake Havasu High School and then prepare for the Division III, Section III Sectional Meet at noon Thursday, Nov. 7 at Cesar Chavez Park in Phoenix.

The Kingman Academy High School swim team traveled to Horizon High School over the weekend and competed in back-to-back meets.

Academy was back in the pool Saturday for the Green & Gold Invite and Bean led the way with a sixth-place finish in the 50 freestyle at 25.18.