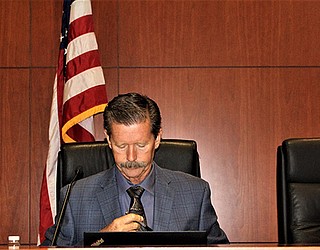 Supervisor Ron Gould of District 5 expressed his concern regarding the cost of county inmates’ phone calls to their families. (Photo by Agata Popeda/Daily Miner)

KINGMAN – When the Mohave County Procurement Department, Monday, presented the Board of Supervisors with an amendment to extend the contract that provides county inmates with telephone services, Supervisor Ron Gould of District 5 shared his thoughts on the subject.

“This is essentially the paid phone system used by the inmates in the county jail,” he clarified for everyone. “I couldn’t find the total number of the revenue, but the county takes 66% of the revenue.”

Gould was curious about what last year’s revenue was, but Procurement Director Rebecca O’Brien was not able to provide the number and promised to find out.

“As a parent of a child who has spent some time in the county’s prison,” Gould continued further explaining his concerns. “I know very well that it not the inmate who pays this. It is inmates’ families who pay this. So in reality, this program loots the families of inmates.”

Gould said that as much he believes that phone contact with families is beneficial to inmates, the county should think again about putting such hardship on inmates’ families.

District 4 Sup. Jean Bishop wanted to know what happens when a family refuses to pay for a phone call, and Gould informed her in such case inmates won’t communicate with anyone but their attorneys.

When Bishop asked him if he suggests no phone calls for inmates whatsoever, Gould said that indeed, he would not have a problem with that.

“But my main point is the county makes 2/3 of the money placing hardship on the families of these criminals,” he said. “Many of the families can be criminals. Others can be county supervisors,” he added, once again referring to his own experience.

“When someone goes to prison, everybody suffers…” said Chairwoman Hildy Angius from District 2.

“I’m sure the revenue is just poor wording for actual expenses,” said Sup. Buster Johnson from District 3, and advised on double checking that.

“And whatever the county makes of the phone calls, it is a fraction of what we spent to incarnate them,” observed Sup. Gary Watson of District 1.

After this lively discussion, the motion to extend the contract until January 2020 was unanimously approved.