Column: Lady Vols’ run comes to an end, but 2019 season won’t be forgotten 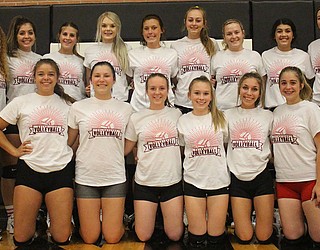 The Lee Williams High School volleyball team finished the 2019 season at 13-5 overall, 8-4 in the 4A Grand Canyon Region - both program bests. The magical year came to an end Tuesday night with a 3-0 loss to Seton Catholic Prep in the first round of the state tournament (Daily Miner file photo)

Before the Lee Williams High School volleyball team even took the court for a match in 2019, the focus was clear – set goals for the future, but control the here and now.

It’s safe to say the Lady Vols achieved that as they head into the offseason following a 3-0 loss to Seton Catholic Prep on Tuesday night in the first round of the 4A State Championship.

Lee Williams’ success this year set the foundation for the future and you don’t have to look far to see how much was accomplished.

The Lady Vols’ 13-5 overall record and 8-4 finish in the 4A Grand Canyon Region are both program bests along with finishing at No. 10 in the final 4A Conference rankings.

But that doesn’t mean Lee Williams can’t surpass those records with head coach Riley Blake. She just completed her second year at the helm and the Lady Vols are set up for future success.

It wouldn’t be surprising to see them regularly advance to the state tournament after they made their first appearance in 2019.

However, it won’t be easy as Lee Williams plays in a competitive 4A Grand Canyon Region. The Lady Vols finished third this season behind Bradshaw Mountain and Flagstaff, who will meet in the quarterfinals of the 4A State Tournament at 6:30 p.m. Thursday.

Those two squads have been a thorn in Lee Williams’ side as it has yet to tally a win over Flagstaff and is 3-6 all-time against Bradshaw Mountain.

A good future goal would be improving on those numbers and only time will tell if the Lady Vols can pull it off.

Nevertheless, there is little doubt that Lee Williams took a big step in the right direction this season.

All five of the Lady Vols’ regular-season losses were against teams that finished in the top six of the 4A rankings – No. 3 Flagstaff (twice), No. 6 Bradshaw Mountain (twice) and No. 2 Estrella Foothills.

Even more impressive is the fact all three of those squads are still alive in the 4A State Tournament.

And the team that knocked Lee Williams out of the tournament is ranked No. 7 and finished 15-3 this season, falling to No. 1 Deer Valley, No. 2 Estrella Foothills and No. 8 Arcadia.

While it’s never easy to lose in the postseason, the Lady Vols have no reason to hang their heads. They gave it their all this season and their contributions prove that the future is bright for 2020 and beyond.