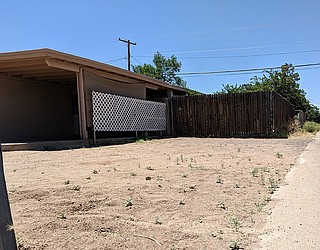 City of Kingman Planning and Zoning Commission has recommended leaving the City’s front-side setback requirements as they are, rather than amending them to allow for additional building area and less headaches. (Photo by Travis Rains/Daily Miner)

KINGMAN – The City of Kingman Planning and Zoning Commission couldn’t get behind a City-initiated zoning ordinance text amendment that would have set front-side setback requirements to 10 feet in residentially-zoned districts.

City staff brought the matter to the attention of commissioners for a number of reasons. City Planner Sylvia Shaffer explained that property owners of corner lots, which are the only properties where front-side setbacks come into play, have been unable to build structures due to current regulations.

Building permit plans have also been submitted for new structures but did not meet front-side setback requirements. That means plans had to be revised and resubmitted, Shaffer said.

“Upon completing research and discussing with various cities and City staff members, there is a general consensus that the reduction of the front-side setback requirement to 10 feet will not be a building or life safety issue,” Shaffer said, also noting that corner lots are usually adjacent to a street and not a property owner.

If the City were to change the requirement to 10 feet, as many other jurisdictions have done according to staff, property owners would have more buildable area and staff would spend less time dealing with those issues listed above.

“Another idea that wasn’t put in here is that basically our ordinance, it’s very outdated,” she said. “Of course, we’re working on that now, but that’s possibly why we had such outdated setback requirements from back when we first established this.”

That ordinance was adopted around 1971 and has remained the same.

The first concern commissioners Laurie DeVries had was in regards to block walls. She worried that if front-side setback requirements were reduced, the presence of block walls on corner lots would obstruct the view of motorists taking the corner turn.

But staff explained that while the wall could be closer to the street, it would still be “far enough back from the corner that it wouldn’t affect the corner cutback visibility area, which is like 25 feet …,” said Principal Planner Rich Ruggles.

Basically, there would be enough space for visibility between the front of the lot and where the wall begins on the side.

Commissioner Scott McCoy said he wasn’t “thrilled” about changing the regulations in R-1-40 districts, as those homes are usually larger and could then be much closer to the street.

He continued later by saying “It seems to me that more clear instruction would solve this problem instead of changing what we have in place already.”

Most of the other commissioners shared McCoy’s concerns, and voted to leave the front-side setback requirements as they now sit. Chair Gary Fredrickson dissented, and Commissioner Charmayne Keith recused herself from the matter, albeit late, as she has a relationship with one of the properties in question.