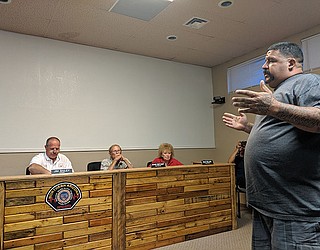 Arthur Garnica expresses his numerous concerns about the NACFD Board of Directors at a July 25 meeting. (Photo by Travis Rains/Daily Miner)

In July, the Arizona Attorney General’s Office found the NACFD Board of Directors violated the state’s open meeting law at multiple meetings in 2018.

The first violation came at a meeting where it was alleged Directors Jim Bailey, Mike Collins and then-Director Carl Hayes discussed matters after adjournment that could later have come to the board for action. Those matters, according to the AG’s office, dealt with potential conflicts of interest, and annexation of the Kingman Airport and Industrial Park by the City of Kingman and what that would mean for the fire district.

Also addressed in the AG’s office findings were alleged open meeting law issues with meetings from May 17, May 24 and May 31, 2018. The complaint was that the minutes from those meetings were not available for view by the public within three working days as required.

Open meeting law violations were found with respect to the May 24 and 31 meetings, but not the May 17 meeting. There were other violations alleged as well, but those did not hold weight according to the Attorney General’s Office.

The board is required to attend an open meeting law training session to remedy the situation. Directors are reportedly set to complete that training telephonically through Arizona Ombudsman-Citizens Aide late Friday morning.

That keeps the board within the 60-day window it had to complete the training as ordered by the AG’s office. Directors will be required to sign an affidavit of attendance.