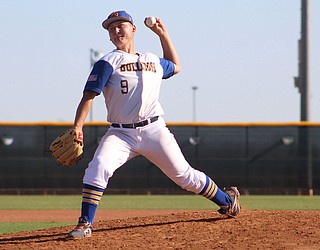 Rilee Araya put up solid numbers during his senior year with the Bulldogs, highlighted by 92 strikeouts and a 1.29 ERA in 54 1/3 innings of work. (Daily Miner file photo)

KINGMAN – Every time Rilee Araya took the field during his first three years with the Kingman High School baseball team, there was always one person he looked forward to seeing – his Poppa, Victor Flores.

Unfortunately, Flores passed away prior to Araya’s senior campaign and the Bulldogs made sure to honor his memory with a simple gesture.

“Our whole team dedicated last season to my grandpa because all those kids throughout the years knew him,” Araya said. “He was there buying the team hot dogs, laughing or other things.”

Araya could have let the loss drive him away from baseball, but instead he used it as motivation to play harder.

And the KHS graduate will continue to play the game he loves for his Poppa after recently signing at Lassen Community College in Susanville, California.

“It means a lot, especially coming from a family that has never really went to college,” Araya said. “It’s a great accomplishment. It can kind of change the family tree.”

Araya made a strong case that he deserves a shot at the next level after putting up impressive numbers during his senior campaign.

“This last year made it a lot more possible,” Araya said. “I struck out a lot of batters compared to the other years. [Tallying] 92 strikeouts is definitely a great year.”

Lassen Community College will gladly welcome Araya after the Cougars lost a strong core of players from a team that won 20 games in 2019.

“The coach said it is perfect timing because all of his starting pitchers left – so I’ll be a starter,” Araya said. “And I’ve always wanted to live in California. I thought it would be perfect.”

But Araya won’t quickly forget the teammates that he has created memories with since childhood.

It is still bittersweet though.

“Baseball-wise, I’ll miss it,” Araya said. “I grew up playing with my teammates for my whole life. It’s definitely weird knowing now that I’m not going to see them this next year. It’s going to be completely different people.”

However, the next step won’t be Araya’s last one. He has higher aspirations and knows this is the best route to follow his dreams.

“The reason I chose this school was because of what I can get out of it,” Araya said. “It’s a 100 percent chance to go to a four-year college or be drafted. I felt it was the best option for me.”