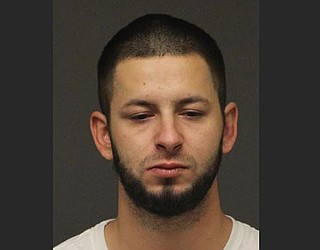 Deputies observed a vehicle heading west on Northern Avenue going about 60 mph early Thursday morning. The driver was identified as Price-Ramos after deputies conducted a traffic stop. At that time, MCSO reports deputies saw blood on the driver’s shirt and could smell alcohol from his person. They then received notice that a reporting party had called law enforcement and said her residence had been “destroyed.”

Deputies responded to the residence in the 3500 block of Devlin Avenue, where they saw broken glass on the floor, holes in walls and a damaged flat-screen TV. The victims said they were asleep when they heard a noise and saw a man, later identified as Price-Ramos, in their bedroom.

According to law enforcement, the victims stated Price-Ramos began to assault the male victim with a baseball bat, with the fight eventually moving to the living room, which caused the damage. The male victim broke away from the fight and ran to a friend’s house nearby. The female victim fled on foot with her young child.

Price-Ramos told deputies he moved out of the residence a few days before and reportedly admitted to entering the residence through a window and assaulting the male victim with a baseball bat.

Jovanie Michael Price-Ramos was arrested for three counts of felony aggravated assault, and misdemeanor counts of criminal damage and disorderly conduct. He was booked into Mohave County jail.