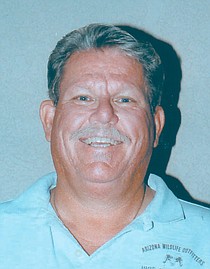 Don is a native Arizona resident who has spent his entire adult life (except for 2 years 9 months and 13 days in Uncle Sam's Army) pursuing his passion of enjoying the great outdoors of Arizona.
Don worked as a law enforcement officer for over 15-years after his stint in the U.S. Army. After an on-the-job injury forced his retirement from the law enforcement field, Don decided to start a business to help others who enjoyed the great outdoors as much as he did.
Working with his friend Larry Sallee, Don started Arizona Wildlife Outfitters in 1987 in Kingman.

In light of the current crisis that is facing all Americans, I wanted to share with you a thought about how to overcome the isolation, or social distancing as it is called. It’s called fishing.

For those who were unsuccessful in this year’s draw for elk and antelope tags, there is still a chance to draw a tag. But you’d better hurry.

One of the most controversial actions that has been taken by the Arizona Game and Fish Commission was in January 2020 when a rule went into effect that banned organized coyote hunting in Arizona where prizes were given or entry fees were charged.

Sport of Kings: Falconry has taken off in Kingman with 13 licensed falconers

The use of birds of prey, including hawks and eagles, for the purpose of hunting has been going on for thousands of years.

The father-and-son team of Dave and Dave Hilton put together the winning pattern to take the top honors at the Kingman Bass Club’s two-day tournament at Martinez Lake on the lower Colorado River.

Column | Here we go again: Trail cameras on the table of AZGFD Commission

Every sportsman knows that the issue of trail cameras has been settled, right?

The Mohave Arms Collectors Association, a group of dedicated male and female firearms collectors, have once again made a donation to the Arizona Hunter Education program in Kingman.

As the fall 2020 draw results were revealed online for elk and antelope to those who have portal accounts with the Arizona Game and Fish Department, there were a lot of smiles as residents of Mohave County learned they drew tags.

If you think you might have drawn a 2020 elk or antelope tag, you might want to check with your credit card company.

The 2020 archery, youth, HAM and general rifle season for javelina closed Thursday, Feb. 27 all over Arizona and now the javelina herds will see a respite from hunting until 2021.