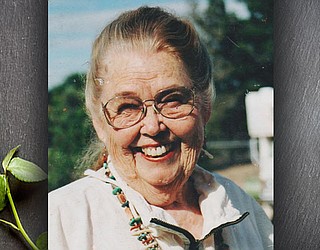 Ms. Ware was born July 13, 1924, in Loma Linda, California. On one of her early trips, Thelma met her husband, George, at a soda fountain in Dallas in October 1946. George bought Thelma a 5-cent lime coke and started talking … then married her 10 days later. Thelma and George were a love story and never stopped talking. They were happily married for 57 years, until George’s passing in 2003.

Their early family years were in California, where Thelma gave birth to four daughters. As a stay-at-home mom, she canned and cooked. Always industrious, Thelma sold apples for cash to buy her sewing machine. Thelma sewed clothes for all the girls and even made Christmas outfits in red, green, red, green for the stair-stepped daughters. At Eastertime, you’d find Mother making Easter dresses of pink, blue, pink, blue … complete with rickrack and special buttons. George’s Navy career transferred the family to Tennessee, and then to Michigan.

When the girls got older, Thelma had a 15-year career driving the school bus for handicapped children at the Grosse Ile Education Department. At the age of 50, Thelma received her first motorcycle for Mother’s Day, a Kawasaki 900. Thelma won the Long-Distance Award for riding from Michigan to California on her first cross country motorcycle trip where she drove her own bike. As members of the Retread Motorcycle Club, George and Thelma spent summers traveling west. Together, they drove more than 200,000 miles on their motorcycles and in their recreational vehicle on an adventure, enjoying this beautiful country.

After retirement in 1986, they left Michigan to head back west to Yucca; 34 years ago, for the happiest part of their lives. Thelma’s creativity expanded into making jewelry, using colorful, natural stones, plus beading. Her painting included a 1st place Award at the Mohave County Fair. When she finally sat in her favorite chair, intricate cross-stitching kept her hands busy. Thelma’s favorite forms of relaxation included many Spite & Malice card games, and weekly domino Mexican Train evenings with her Yucca friends.

Due to national coronavirus issues, there will be no viewing or services after the burial ceremony. Burial services are at 1 p.m. at the Yucca Cemetery on Saturday, March 21.