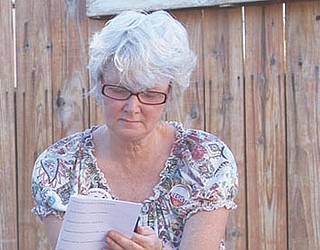 Kingman resident J’aime Morgaine might have a new bone to pick with the Mohave County Planning and Zoning Commission.

Morgaine, a former Democratic candidate for the Arizona Senate, has been an outspoken critic of commission member LaJuana Gillette, of Lake Havasu City, after the latter wrote a series of social media posts that Morgaine and other county residents viewed as racially antagonistic. Morgaine has appeared at every meeting of the commission since August, she says, to protest Gillette’s continued presence on the panel. At Wednesday’s meeting, however, Morgaine saw additional cause for offense.

When she was given the opportunity to speak during the meeting’s call to the public, commission members Bill Abbott, Dale Kelley and Brad Meahl walked out. According to Morgaine, this action came following a joke by the commission members in reference to Mohave County’s Democratic community.

Morgaine and her supporters previously called for her removal after social media posts by Gillette appeared to disparage minorities last year. According to Morgaine, such views have no place in any public position, whether that position is appointed, or elected.

Gillette, who was also appointed by Gov. Doug Ducey to the Arizona Board of Nursing last year, has since denied accusations of racism, indicating a perceived liberal compulsion toward hurling such accusations at those who don’t share their respective views.

“This is a Christian nation,” Gillette posted to Facebook in July. “I like it like that. It’s what we have always been and what we were meant to be. We have to fight for our country and America. We must stop the minorities from coming here and trying to change us.”

Gillette’s comments further warned against the practice of Sharia law in Muslim communities throughout the country. Mohave County Supervisor Ron Gould, who appointed Gillette to her position on the Planning and Zoning Commission, chose to take no action in reference to Gillette’s remarks last year.

Ducey, however, has since rejected Gillette’s apparent views.

“These comments are not aligned with our views – we denounce them,” Ducey spokesman Patrick Ptak reportedly told Arizona Republic journalists in December.

Morgaine has indicated she will continue to seek Gillette’s removal from the commission.

“This is supposed to be a commission that represents every single constituent in this county,” Morgaine said. “Gov. Doug Ducey has publically denounced LaJuana Gillette. We need urgent legislative reform so we can get (her) – with her views and beliefs that are antithetical to Arizona values – off of appointed commissions. Mohave County doesn’t have that kind of legislation yet. If the governor of this state can understand racism and xenophobia is a nonpartisan issue, then this county should be able to make the same decision.”

Meahl represents Mohave County’s third district, and was appointed to the commission by Mohave County Supervisor Buster Johnson. Meahl could not be reached by telephone for comment as of Thursday afternoon, but Johnson spoke to Today’s News-Herald about Meahl’s actions.

“There’s nothing that says they have to sit there,” Johnson said. “They can’t respond to questions and they can’t take action during the call to the public. But they don’t make laws. They’re volunteers. They don’t have authority over anyone else – the only power the members have is their one vote. It’s hard to get volunteers like that when they’re getting attacked for doing a job that doesn’t pay any money.”

The meeting continued into its regular agenda shortly after Morgaine left the podium.