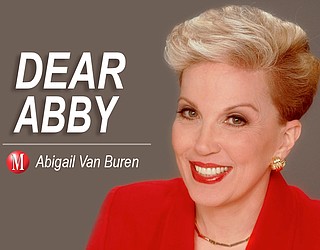 DEAR ABBY: Parents frequently write to you asking for advice about their children, seemingly asking permission to butt in where they should not.

When I was in my 20s, I dated a guy who had just returned from the Navy. I saw him - and others - while working and going to college. Sometimes I'd drive 40 miles to visit him and stay with my mother. At some point, he told me we wouldn't be seeing each other anymore. He doesn't remember the details of the conversation, and neither do I. I liked him very much and may have been in love.

I found out years later that my mother had called him to her house and told him to marry me or let me go. We were both young and not ready for marriage. I have no idea what possessed her to do that. Sometimes I wish I had talked with her about it, but it wouldn't have changed anything.

He and I have visited a few times during the past few years. We both married wonderful people, had kids, and have had good lives. Yet there has always been the question: What if Mom had not interfered?

DEAR F.Y.W.: Whether that romance would have led to marriage had your mother stayed out of it, I can't guess and neither can you. Fortunately, you and the young man went on to have happy lives and successful marriages.

Some mothers can't resist the temptation to interfere in their adult children's lives. Today, when it is constant, it's called "helicopter parenting," and the unfortunate result can be disabling rather than helping because it prevents children from resolving their own issues.

DEAR ABBY: My 30-plus-year-old brother struggles with substance abuse. It has been going on for years. After countless trips to rehab, inpatient, outpatient and all the step programs, he still uses. Periodically he'll be sober for a short time, but it never lasts. For a long time, I have been torn between total disassociation or the sporadic run-in at family events.

Seven months ago, his baby boy was born with narcotics in his system. Birds of a feather flock together, I guess. Since then he hasn't been invited to my home or any event I have hosted. My mother and the rest of my siblings still invite him into their homes and act as if his lifestyle choices are OK.

Am I supposed to boycott family functions (holiday gatherings, summer BBQs, birthday parties for my kids, nieces and nephews) because they all continue allowing him to attend? I honestly don't know what is right here. Please help. - HAD ENOUGH IN NEW YORK

DEAR HAD ENOUGH: Your brother has an addiction he cannot seem to shake. It is a disease that, in spite of treatment, persists. If you prefer not to include him at events you host or invite him into your home, that is your right. But for you to forgo family events in an attempt to punish him is isolating only yourself, and I see nothing positive to be gained by it. Because your feelings about this situation are so strong, the ultimate decision is yours.