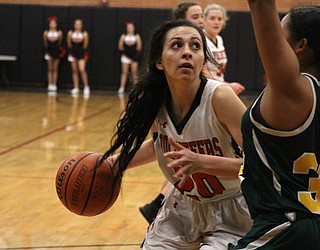 Lee Williams senior Hayle Davis notched 12 points Friday in a 60-46 loss to No. 5 ranked Greenway. The Lady Vols led by one at halftime. (Photo by Beau Bearden/Kingman Miner)

KINGMAN – The season is far from over, but the Lee Williams High School girls basketball team can compete with anyone in the 4A Conference.

The Lady Vols proved that by taking a one-point lead into halftime Friday against No. 5 ranked Greenway, but couldn’t hold on in a 60-46 setback at LWHS.

“If we play like this all the time, we’d be right there with everybody else,” said Lee Williams head coach Jerry Arave. “We were up 14-6 at the end of the first quarter – that’s the fifth-ranked team in the state. They have a girl who is 6-foot, 2-inches and we played them tough. So I was very proud of our effort tonight. We really, really played hard.”

The No. 36 ranked Lady Vols’ eight-point lead after one had a lot to do with sharing the ball. Lee Williams had four different athletes score, while Bridget Mullings accounted for all of Greenway’s scoring.

Mullings, who Arave talked about above, proved to be a thorn in the Lady Vols’ side due to her length. The junior finished with a game-high 22 points, including 15 in the second half.

Lee Williams never backed down from the challenge though, rallying from a 13-point third-quarter hole to stay within striking distance. A big part of that was a 9-3 run that cut the deficit to 40-33.

But the Lady Vols couldn’t get closer than six points.

It was another tough one after the Lady Vols were dealt a 42-39 setback Thursday in Prescott.

At Prescott, the Vols picked up their third straight region victory Thursday in a 73-70 decision over the Badgers.

The Vols took a 36-28 halftime lead and held off Prescott’s third-quarter rally to get the win.

At KHS, the Lady Bulldogs picked up their first win of the season Thursday and did so in dominant fashion with a 10-2 blowout against the Lady Wranglers.

At KHS, the ball is starting to roll in the right direction for the Bulldogs as they notched their fourth straight victory Thursday in a 3-0 decision over the Wranglers.

Jahir Boo, Juan Ipina and Alex Romero each scored for Kingman as it improved to 4-2, 3-0 in the 3A Northwest Region.

The Bulldogs are back in action at 4 p.m. Monday when they make the short trip to Lee Williams (3-1), which won the earlier meeting 5-0 on Dec. 3.