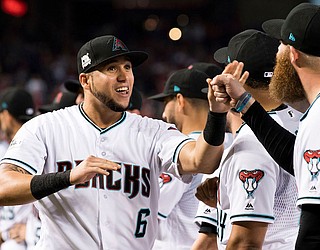 According to an AP source, David Peralta signed a three-year, $22 million contract to remain with Arizona. (File photo by Sarah Sachs/Arizona Diamondbacks)

PHOENIX (AP) – Left fielder David Peralta dodged salary arbitration by agreeing to a $22 million, three-year contract with the Arizona Diamondbacks on Friday, a person familiar with the deal told The Associated Press.

The person spoke on condition of anonymity because the agreement hadn’t been announced.

The 32-year-old has been a regular in the Diamondbacks outfield over the past few seasons.

He played in 99 games last year, batting .275 with 12 homers despite battling a shoulder injury that bothered him for much of the year and eventually required season-ending surgery.

Chafin and Andriese were both in the bullpen last season. Chafin is a durable lefty who appeared in at least 70 games in each of the past three seasons. He had a 3.76 ERA and 68 strikeouts in 52 2/3 innings last year.

PHOENIX (AP) – The Arizona Diamondbacks have finalized a $3 million, one-year deal with relief pitcher Héctor Rondón, adding more depth to the back of their bullpen.

The 31-year-old right-hander is a seven-year veteran who helped the Chicago Cubs win the World Series in 2016. He pitched last season for Houston and had a 3.71 ERA over 62 appearances, including one start, as the Astros advanced to the World Series before losing to Washington.

The Diamondbacks finished with an 85-77 record last year and Rondón said he’s excited to join a team that he believes is on the rise.

“Last year, they were really close to going to the playoffs,” Rondon said. “And I think as a player, that challenge for me is huge. I like the way they play and the way they think and it was an easy decision for me to go to the D-backs.”