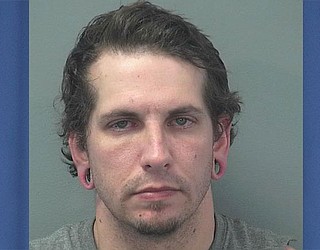 At approximately 10:50 a.m., deputies observed a truck parked off Highway 91 at milepost nine, and observed posted “No Trespassing” and “No Parking” signs.

Deputies parked behind the truck and activated their overhead lights, and as the deputy approached the vehicle, the driver reportedly started the truck and placed it in gear. Deputies yelled for the driver to turn off truck, to which he complied, and deputies made contact with the driver, identified as Savage.

Deputies asked Savage for the vehicle documents, and reportedly observed a large knife in the center console while he retrieved the items. Savage was asked to exit the vehicle and according to deputies, he was having trouble walking and staying balanced. Deputies asked if there was anything illegal in the vehicle, and Savage allegedly admitted to having heroin that he had been smoking.

Field sobriety tests were conducted and a search of the vehicle revealed a clear baggy with approximately six grams of suspected heroin, and other drug paraphernalia.

A search warrant for a blood draw was completed to confirm impairment at the time of the incident.

Savage was arrested on suspicion of possession of narcotic drugs and drug paraphernalia, both felonies, and a misdemeanor charge of driving under the influence. He was booked into Mesquite City Jail without incident.