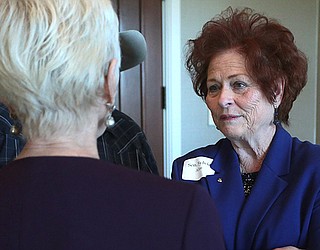 Story by Howard Fischer, for the Miner

PHOENIX – The Republican-controlled Legislature took the first steps Thursday to not only enshrine into the Arizona Constitution existing requirements for police to cooperate with immigration officials but extend the mandate to universities, public schools and hospital districts.

The 4-3 party line vote by the Senate Judiciary Committee came after an often-heated session with some audience members shouting their objections. And Sen. Eddie Farnsworth, R-Gilbert, who chains the panel, gaveled down one speaker after he called SCR 1007 "racist.”

"There's nothing racist about anyone up here,” Farnsworth told Hugo Polanco who was testifying on behalf of Living United for Change in Arizona, a Hispanic activist organization.

Sen. Sylvia Allen, R-Snowflake, the sponsor of the measure, said the measure is designed to stop "the criminal element that is flooding into our country,” something she said is encouraged by communities declaring themselves "sanctuary cities” or directing police not to cooperate with immigration officials.

There are no actual "sanctuary cities” in Arizona. The closest the state came was last year when voters in Tucson rejected a proposal to make such a declaration.

Beyond that, Sen. Martin Quezada, D-Glendale, pointed out that there already are laws on the books covering the issue, all part of SB 1070, enacted in 2010, which was designed to give police more power to enforce federal immigration laws.

Federal courts have since voided many of the provisions.

What that suggests, Quezada said, is a political motive for SCR 1007: Putting something on the November ballot designed to "pander to a small group of people who are into this type of thing.”

"There is a base of people who like this kind of stuff,” he said.

Farnsworth, however, said there are valid reasons for pursing the constitutional amendment.

It starts, he said, with the fact that the Arizona Supreme Court has ruled that the state's 19 charter cities are not subject to certain state laws. Farnsworth said this would foreclose any argument they might have that SB 1070 does not apply to them.

He also rejected arguments that this is about politics.

"This isn't political rhetoric,” Farnsworth said, saying the measure does not change any standards for immigration.

It's not just legislative Republicans who are pushing that agenda. Gov. Doug Ducey called for such a constitutional amendment in his State of the State address last month.

That expansion beyond the current requirements in SB 1070 for cooperation by police with immigration officials did cause some concern.

"SCR 1007 would require any political subdivision of Arizona, including schools, university and health care centers to coordinate and collaborate with federal immigration entities in determining the immigration status of any individual,” said Darrell Hill of the American Civil Liberties Union. "SCR 1007 turns every part of Arizona's government into immigration enforcers, destroying the trust between community and government.”

And what that also means, Hill said, is that "untrained government officials” will be trying to figure out who is in this country legally and who is not, "leading to abuses and violations of civil liberties.”

"Teachers in Tucson Unified School District may be forced to supply immigration information regarding students in their classroom,” he said.

"Parks may be asked to perform immigration checks on visitors,” Hill continued. "Patients at Maricopa Medical Center may be ripped out of their hospital beds as nurses and doctors are forced to comply with federal immigration authorities.”

Farnsworth said he sees nothing wrong with telling public officials and employees they will obey the law.

"If you don't like the federal immigration policies, change them,” Farnsworth said. "But we are saying in Arizona we're going to obey the law.”

Sen. David Livingston, R-Peoria, denied that his vote to put the issue on the November ballot was divisive.

"If the majority of people in Arizona don't want this, it gives them a great opportunity to voice their opinion,” he said. "We are not mandating this.”

Sen. Lupe Contreras, D-Avondale, whose grandparents brought his father and uncle to this country from Sonora, took offense to Allen's analysis of who is immigrating here.

And Sen. Andrea Dallesandro, D-Green Valley, chided her Republican colleagues for suggesting that immigrants are somehow dangerous, pointing out she is the only legislator on the panel from a border county.

"I struggle to feel as safe here in Phoenix as I feel in Santa Cruz County, all the way down to Nogales,” she said. And Dallesandro said "political rhetoric like this” does great harm to border counties, sending the message that it's not safe to live there.

"It hurts my constituents,” she said.

"It hurts my Realtors who are trying to sell homes,” Dallesandro said. "It hurts my small businesses.”

Rep. T.J. Shope, R-Coolidge, has introduced a virtually identical measure in the House. It has yet to get a hearing.