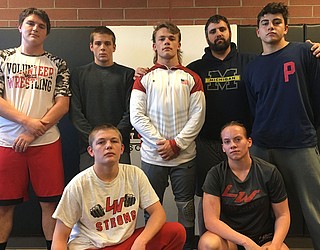 KINGMAN – Coaches usually have a variety of topics to discuss following a season, but there are no guarantees that those talks will result in positive change. Don’t tell that to Lee Williams High School wrestling coach Dan Ondrejka.

He and assistant Ray Sanchez focused on challenging the Vols to reach a higher level and it paid off as a school-record six wrestlers will compete Friday and Saturday at the Division III State Championship in Prescott Valley.

“We didn’t know how they were going to react. They reacted in some ways we expected and some ways that we didn’t think they would,” Ondrejka said. “In the end, they went above and beyond. Being battle-tested the way they were helped push them when they needed to be pushed the most. It really showed on the mat in the later rounds for guys who weren’t even slated to get as far as they did in the sectional brackets. It’s amazing for them come out the way they did and make it to state.”

John Chandler was one of those wrestlers as he won a sectional championship at 132 pounds. He recently transferred to Lee Williams and knew right away he could find success.

“Honestly I was expecting (to win a title) because of this environment,” Chandler said. “Everyone is pushing each other as hard as they can. I wrestled as hard as I could when I got there. I was down by two points every single match and I came back and ended up winning.”

And that grit has a lot to do with the conditioning, which paid off during his championship match.

“In the sectional finals, I defeated a kid who was ranked second in state,” Chandler said. “And I didn’t even know that until after the fact. So that felt pretty good. It felt like all the hard work has finally paid off.”

Jimmy Wayman is another Vols wrestler who hopes all the work pays off. The senior, who also won a sectional championship, took third at state a season ago, but his sights are set much higher.

Wayman is in a good position to accomplish his goal of a state title after finishing with a record of 45-3 to earn the No. 2 seed in the 145-pound bracket.

“I think I got the best seeding I’ve ever had,” Wayman said. “That’ll work in my advantage because my matches will get progressively harder instead of all over the place.”

And if all goes according to plan, Wayman will battle Combs High School’s Seth Fernandez in the championship as he is the No. 1 seed.

“He is pretty good,” Wayman said. “It just goes off win percentage. He came in late in the year, so he only has 12 matches and is 12-0. His winning percentage is better than mine, but I’m not worried about anyone.”

Lee Williams’ other sectional champion is Stephanie Broadbent. The senior finished 9-2 at 160 pounds and this will be her first trip to state.

“I’m definitely going to have nerves,” Broadbent said. “There’s always going to be those nerves, especially with that first match. But after that, I feel like I’ll be able to really concentrate and do what I do best.”

Meanwhile, sophomore Payton Wayman has already experienced those nerves after making his first trip to state a season ago. Payton, who took second at sectionals, went 42-9 at 152 pounds and owes a lot of his success to a familiar face.

“I couldn’t have done it without my brother Jimmy, he’s pushing me every day,” Payton said. “Some days were harder than others. So a big thanks to him and the coaches, especially.”

The Vols will also have a pair of juniors making their first trip to state in Christian Marzo (170 pounds) and Zach Allen (220 pounds).

Allen took third at sectionals and finished with a record of 36-19.

“This year I wanted to go to state,” Allen said. “I strived hard to practice in this room and get through the different tournaments and meets. And sectionals came and I said, ‘Alright, this is it.’ I worked hard at sectionals and I ended up making it to state.”

Meanwhile, Marzo finished fourth at sectionals and was 22-10 this season, which gives him a difficult matchup with Yuma’s Servando Campos who went 60-3.

“I’ve wrestled people who have really good records before,” Marzo said. “I’ve noticed that sometimes you can get too wrapped up being nervous. And once you actually wrestle them, they’re not insanely good. When I put my hands on them, they don’t feel super strong. It’s just you keep going and never stop making moves.”

That will be key for the Vols as they try to find success at state and keep moving in the right direction.

“I’ve been saying it all year – to have that type of heart and push ourselves the way we pushed ourselves really shows how well our program is going since we got our first state champ (in Nic Verville during the 2017 season),” Ondrejka said. “And we want to keep that progression going from here. This is history. We tell them that all the time – ‘We’re making history and we want to keep making pages in that book. We want to put wrestling on the map here.’”