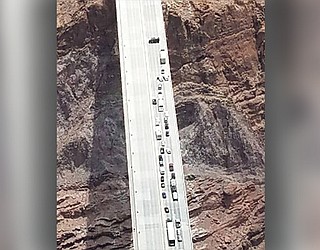 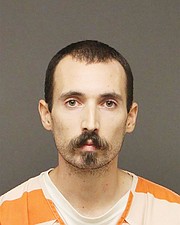 KINGMAN – A man who blocked a bridge near the Hoover Dam with a homemade armored vehicle in 2018 has pleaded guilty in Mohave County Superior Court to making a terrorist threat.

Matthew Wright, 32, of Henderson, Nevada, pleaded guilty to the terrorism charge and two other felony crimes, including aggravated assault and fleeing from law enforcement as part of a plea agreement Feb. 4, the Arizona Republic reported Tuesday.

Wright faces less than a decade in prison compared to a potential life sentence, prosecutors said.

Wright blocked traffic by parking his vehicle across lanes on the Mike O’Callaghan-Pat Tillman Bridge above the Colorado River in June 2018, authorities said. He surrendered to authorities on the Arizona side of the bridge after a 90-minute barricade situation that stopped traffic on the main highway between Las Vegas and Phoenix. Police said they later discovered two assault-style rifles, two handguns and 900 rounds of ammunition.

In a letter from jail explaining he was motivated by patriotism, Wright used the phrase “for where we go one, we go all," at the end of the letter. The phrase is used on message boards in the QAnon community, authorities said. QAnon conspiracy theories center around a supposed government insider who adherents believe is spooning out vital revelations using cryptic language and signs.

Wright sent another letter to President Donald Trump that seemed to apologize for his actions, authorities said.

Wright's attorney Michael Denea declined to comment on the case until his client was sentenced.

Sentencing is scheduled for March 4.