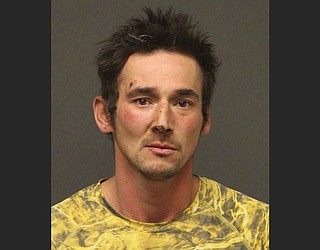 KINGMAN – Casey James Lance, 33, of Dolan Springs, was arrested in Chloride on Thursday, Feb. 6 after allegedly firing a handgun into the air.

At approximately 8:30 p.m., deputies responded to the area of Rainbow Avenue and Second Street in Chloride in reference to a weapons offense.

Dispatch received information that a male subject, later identified as Lance, had fired a gun into the air and was arguing with a neighbor.

Deputies contacted Lance, who was reportedly observed holding a gun.

Lance sat down on the ground and threw the gun off to the side when ordered.

However, he reportedly refused verbal commands to lay on his stomach. As deputies approached, Lance reportedly moved his hands to his waistband. Deputies were able to place Lance onto his stomach and into restraints.

Deputies took possession of the weapon and made contact with a neighbor, who advised she heard the gunshot and went outside to see Lance pacing in front of a neighboring residence.

Lance was arrested on suspicion of felony disorderly conduct with a weapon.

He was transported to the Mohave County Adult Detention Facility.