Could some Kingman streets revert to gravel? 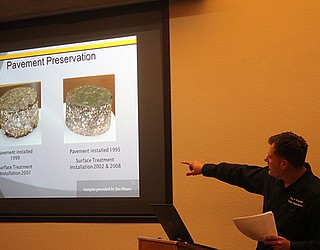 There has been no shortage of discussion about City of Kingman pavement conditions and preservation in recent years. Pictured is Streets Superintendent Jack Plaunty discussing the issue during a city council budget work session. (Photo by Travis Rains/Kingman Miner)

KINGMAN – With 64% of Kingman roads in poor or very poor condition, according to Streets Superintendent Jack Plaunty, the City of Kingman is again communicating to residents the importance of preventative street maintenance.

The city recently uploaded two videos to its Facebook page in which Plaunty describes the current climate of city streets. He begins by describing the basic makeup of pavement, which is comprised of aggregate and asphalt binder, the latter being the glue that holds the aggregate, or rock, in place.

“And our city sees a lot of both, which makes it hard to keep up with our limited crews, equipment and resources,” Plaunty said.

And so it’s of primary importance that Kingman addresses its streets in a timely manner.

That’s true to the point of potentially requiring total reconstruction of roads, or even reverting some roads back to gravel, Plaunty explained.

For example, deferring $100,000 worth of maintenance would cost the city between $600,000 and $1.4 million in the future. Road maintenance projects are budgeted based off of square yardage needing addressed. Preventative maintenance performed on a road in decent condition could cost around $2 or $3 per square yard. However, once a road falls into a failed state, that cost is closer to $100 per square yard.

Kingman’s Streets Department is primarily funded through gas taxes collected and distributed by Arizona, and the state has also shared lottery revenues in the past.

“Since 2003, the state has reduced gas tax shared revenues and eliminated sharing lottery revenues as well,” Plaunty explained. “With the drop in revenue, street maintenance was put on the backburner so that general street operations could be funded.”

The 1% increase to Kingman’s restaurant and bar tax that occurred in 2011 provided a dedicated funding source for street maintenance. However, moneys received were a fraction of what was truly required, Plaunty said.

As a result, the City of Kingman is currently in what Plaunty called a “reactive maintenance trap.”

“Due to inadequate budget we’re deferring much-needed preventative maintenance,” he said. “This leads to premature failure of our roads and rework.”

That rework entails crews patching potholes, but the asphalt around those patches continues to fail.

“Without adequate funding, hard decisions will have to be made regarding street maintenance in the city moving forward,” Plaunty said. “Without a long-term, consistent funding source that is strictly dedicated to taking care of Kingman’s paved roads, there is no doubt that some roads will turn back to gravel.”

To watch the videos, go to https://www.facebook.com/cityofkingman/.

Information provided by the City of Kingman