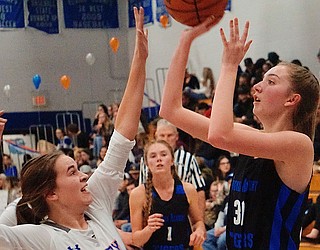 Academy senior Faith Edwards attempts a shot Tuesday in a 31-25 loss to Chino Valley. (Photo by Aaron Valdez/For the Miner)

KINGMAN – All the Kingman Academy High School girls basketball team needed to do Tuesday was knock off Chino Valley to give itself a chance to make the 3A Conference Play-In Tournament. A loss would all but end the Lady Tigers’ season and unfortunately that’s what happened in a 31-25 road setback.

Academy led 11-8 at the end of the first quarter, but couldn’t carry that momentum over into the second as it trailed 17-13 at halftime.

Try as they might, the Lady Tigers could never take the lead and inched within only three points the rest of the contest.

At KHS, the Lady Bulldogs made sure to send their seniors out on a high note Tuesday with a convincing 53-38 victory over the Lady Dust Devils.

And it was the two seniors who led the way as Emilee Araya scored 17 points and Star Talayumpteua added 15. Kassidy Strawbuck added seven, while Amber Lopez finished with six.

Kingman trailed 15-12 after the first quarter, but held River Valley to just seven points in the second quarter to take a 29-23 halftime lead.

The Lady Bulldogs were outscored 10-8 in the third, but used a 16-point fourth quarter to clinch the victory.

At KHS, the Bulldogs may not have clinched a spot in the playoffs Tuesday, but they made sure River Valley didn’t win a region title by tallying an 89-72 victory over the Dust Devils.

“It was big for us to end the season on a win and it was awesome to score a season-high 89 points,” said Kingman head coach Nick Juby. “I couldn't be more proud of my three seniors for everything they have done for the program these past four years.

And two of the three Bulldog seniors led the way as Rider Havatone scored 33 and Jacob Martel added 17. Christian Cleaver is Kingman’s other senior.

At Chino Valley, the Tigers didn’t find much success on the road Tuesday in a 61-31 setback to the Cougars.

Academy trailed 33-8 at halftime, but found a little spark with 16 points in the third quarter.