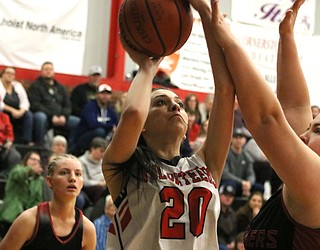 KINGMAN – Every senior class is special in its own way, but sometimes one group stands out more than others.

That is the case this year for the Lee Williams High School girls basketball team as the trio of Liberty Cronk, Hayle Davis and Alexis Hecker began their career with head coach Jerry Arave and ended it in grand fashion Tuesday with a 51-28 victory over Mingus on Senior Night at LWHS.

“They’ve stayed with the program since they were freshmen,” Arave said. “They did everything we’ve asked, they went to the summer stuff and they just played really well the last four years. And they’re kind of special to me because my first year was their first year as freshmen. We were all brand new together.”

Cronk and Davis showed they aren’t brand new anymore as they each scored 17 points to lead the Lady Vols to victory. Davis also made all eight of her free-throw attempts as Lee Williams finished 13-of-21 at the charity stripe.

“We hit shots, but we still missed a lot of easy layups,” Arave said. “Liberty Cronk got hot from the outside and Hayle Davis was scoring on the inside and made all of her free throws.”top

The Lady Vols held a slim 13-7 advantage after the first quarter, but pushed it to 26-13 at halftime and used an 11-0 run in the third quarter to take a commanding 37-15 lead they never surrendered.

But it wasn’t just about scoring.

“Our defense makes a difference,” Arave said. “Mingus turned the ball over a hundred times. We just have to finish. If we can do that, we would’ve scored 80 points. Our defense is our bread and butter.”

It was great way for Lee Williams to cap the regular season, but unfortunately it couldn’t advance to the postseason for a third straight year. The Lady Vols finished No. 26 in the final 4A Conference rankings and only the top 24 squads earn a bid.

“If we don’t make it to state, it’s probably because of one game,” Arave said Tuesday night. “If we would’ve won one more game – either Prescott, Dysart or Bradshaw Mountain. We win one of those games, we’re probably in (the playoffs). It’s going to be hard to get in because we’re going to need some help.”

Lee Williams didn’t get that help after it finished 9-9 overall and 5-7 in the 4A Grand Canyon Region.

That doesn’t mean the Lady Vols aren’t optimistic about the future of the program.

“We have five juniors returning, so I’ll have five seniors next year,” Arave said. “Plus two freshmen, Becca Arave and Brooke Hunter, who will be sophomores with a year of varsity experience under their belts. We’re going to be tough next year, but we do still have to shoot better.”