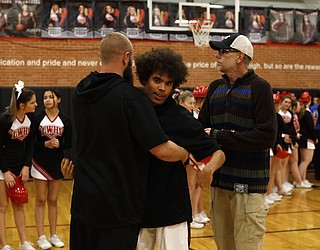 KINGMAN – It was a moment Jace Brooks will likely remember for the rest of his life. The senior had yet to enter a game this season, but he got his opportunity to shine Tuesday during the annual Silent Night game.

Brooks, who has cerebral palsy and epilepsy from a stroke he had before he was born, proved the doctors wrong who said at seven months he would never walk or talk, as he scored a basket to help propel the Lee Williams High School boys basketball team to a 59-37 win over Mingus on Senior Night at LWHS.

“That’s awesome for him,” said Lee Williams senior Kade Juelfs. “He shows up to all the practices and does everything that we do. He works just as hard as anyone, so he deserves that. I’m happy for him.”

And the Vols made sure to let Brooks know that as they surrounded him following the final buzzer.

“I really have no words to describe what that moment felt like,” said Lee Williams head coach Cain Atkinson. “I’m speechless actually. I’m extremely happy that it played out that way. Jace is one of a kind. And I guess it’s hard for me to come up with the right words because it was just amazing. And a very special night.”

Brook’s moment was the icing on the cake as the Vols led from start to finish, led by Juelfs’ game-high 31 points. Lee Williams’ other seniors also found their way into the scorebook as Drew Cardiff finished with 10, followed by Josiah Hooper with eight, Jayden Hooper with four, Tony Luna with three and Brooks with two.

“Kade is extremely crucial every game – he’s the heart and soul of the team,” Atkinson said. “I couldn’t be more proud of him. Not just Kade, but all of our guys and all of our school. The way they acted and it’s just hard to come up with the right words.”

And that speechless feeling didn’t change when Atkinson was asked about this year’s senior class.

“I have been around these guys pretty much every day for four years. Some of them a little longer,” he said. “It just means a lot to be able to coach these guys and hopefully make a positive influence. These are relationships that will go well beyond the end of this basketball season and when they graduate. I will do anything for those guys as long as they need me.”

“This was a great way to finish off the (regular) season,” Atkinson said. “I think tonight was very special for a lot of people. And again, just I’m at a loss of words. Hopefully we can continue the good fortune into the playoffs.”