Meadview woman arrested in Kingman on suspicion of forgery 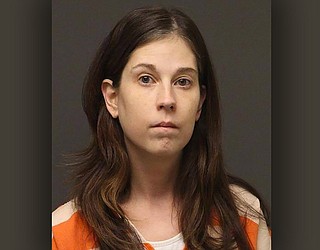 KINGMAN – Kimberly Gendreau, 35, of Meadview, was arrested by Kingman Police Department officers following a report of usage of a counterfeit $100 bill at a local store.

Officers contacted Gendreau at about 10:40 p.m. when employees of a store in the 3400 block of Stockton Hill Road reported that Gendreau had presented a counterfeit $100 bill for payment.

During the investigation, KPD says it was confirmed that the bill was fake. Gendreau was also reportedly found to be in illegal possession of narcotic medication, in addition to being wanted regarding a KPD misdemeanor theft investigation from May 2019.

Gendreau reportedly admitted involvement in the offenses, and was arrested on suspicion of forgery, possession of narcotic drugs and several unrelated warrants. She was booked into the Mohave County Adult Detention Facility.