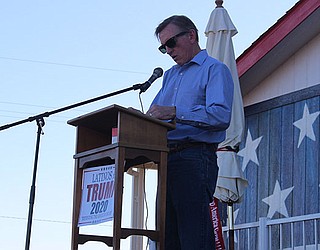 Let us know what’s on your mind in 40 words or less. Submit Rants and Raves at kdminer.com/rants-and-raves or email editorial@kdminer.com. If your rant/rave is about a specific story please mention the headline.

Trump schedules campaign rally in Phoenix on Feb. 19 – I won’t be going. I will always be a John McCain fan. Honesty, integrity, good taste and morality have fallen by the wayside with this administration.

County special events – Better make a special event clearer. If a baseball league has a game and too many people come to watch then it will break the law. Way too many variables.

I am disappointed (Mohave County Supervisor) Buster Johnson is pushing uranium mining which will harm the environment and cause a public health crisis. We need supervisors who reflect our values. They need to clean up the past mining destruction, not add more radiation.

Lt. Col. Alexander Vindman, a Purple Heart recipient, was subpoenaed and followed the law in testifying unlike Trump’s lapdogs and yet he is treated like a common criminal. Trump never served a day in the military. He’ll never be as patriotic as Vindman.

Trump is now out for blood and vengeance on anyone who did their patriotic duty and testified before Congress. Hopefully, this will not stop future government employees from coming forward as these brave souls did. Is this Russia?

Grocery store, please label your cinnamon raisin bagels bin. All the rest are labeled. Sometimes I get blueberry out of the same location when usually it is cinnamon raisin. I think your employees get confused because it is not labeled.

Tom Purcell column: The D.C. disorder that’s sadder than sad – Conservatives do not know how to get us out of this economic mess. Conservatives are big government. They take public money and give it to private concerns. This is a form of socialism.

GOP Senators said Trump learned his lesson because he was impeached. Could they be that disingenuous. Trump has continuously stated that he did nothing wrong so now we have an emboldened maniac in the White House.

Trump relishes impeachment acquittal as campaign revs up – Thank you, Mitt Romney, for having the bravery to stand up for moral principles. You are a true Republican.

So, wearing an ankle bracelet was an inconvenience to the tagger? I am from California, and have seen what happens when tagging is ignored. Can I expect to see this young man painting over his art any time soon?

State of the Union speech by Trump had so many lies it was beyond belief and to give Rush Limbaugh the Presidential Medal of Freedom was contemptible.

Gun Sanctuary – Gun sanctuary cities are safe. Chicago has strict anti-gun laws and is a scary place. A National Rifle Association rally is a safe place. Mass shootings take place in gun-free zones such as schools. If you criminalize guns, then only criminals have them.

Cities and counties need money to support their citizens. Sales taxes are the fairest way to obtain such funding. If you want them to do their job, do yours and vote “yes” on all requests for additional sales taxes to help our local governments help us.

My bulk trash pickup sits on my street since Feb 5. Called every day since the sixth. Special work order, they said, and promised pickup every day since. No pickup. Looks awful. They never remember me when I call.