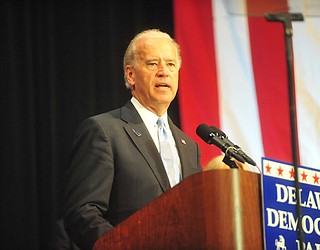 Joe Biden, 76, is one of the older candidates seeking the Democratic nomination for U.S. president. Experts say that health and fitness are better barometers of a candidates’ fitness for office than physical age. (Courtesy photo/Joe Biden Flickr)

Got something on your mind? Tell us about it in 40 words or less.

Report reveals US budget deficit to exceed $1 trillion next year – The lack of fiscal responsibility by the “Trump conservatives” makes us wonder. Why did we elect this “conservative” administration? They are conservative in name only. Drain the swamp.

Harsher sentences for animal abusers – Yes! There is no excuse to be cruel to an animal. This law does not go far enough. Studies show that those who are capable of harming animals often step up to harming other humans. Good job.

Quit now, Joe – “He’s showing signs of mental confusion.” The same thing could be said of the president. Neither one of them are who America needs right now. An old, old guy and the 10-year-old currently in office.

The bloody truth about US immigration policy – We should stop all immigration now. A lot of Democrats and Republicans in this country don’t want to work. Put them to work first whether they want to or not. No more freebies for the lazy.

McSally gets a challenger in Arizona Senate race – Yawn, ho hum. Another Trump guy. Try to keep up with what’s about to come down.

Daniel McCarthy challenges McSally – More info please. Where does McCarthy stand religion wise, for or against abortion? Does he support the very loose school sex-ed classes that teach homosexuality is normal or perhaps he believes it should be left to the parents.

Quit now, Joe – Never been a Biden supporter; felt very sorry for his family losses however. Yesterday’s story about pinning a soldier, now known to be three stories pulled together with no correct facts, was too much. Then the ... touching. Time to leave.

Arizona joins other states in calling on the Supreme Court to overturn DACA – DACA is a path to citizenship for thousands of immigrants here since childhood by no choice of their own, but working with the rest of us, paying taxes, and serving in the military. Is Arizona determined to go backwards? Shame.

All Rants and Raves are subject to editing. Submit RANTS AND RAVES at kdminer.com/rants-and-raves or email editorial@kdminer.com.