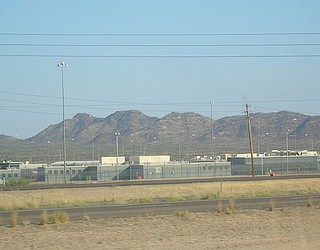 PHOENIX – The Arizona Department of Corrections director says vacancy rates for correctional officers have increased across the state, a report said.

Director Charles Ryan warned Republican Gov. Doug Ducey in a retirement letter that vacancy rates at Arizona's prisons have increased from 1.7% to 19% since 2012, The Arizona Capitol Times reported Monday. "This is a crisis," Ryan said. The vacancy rate of correctional officers has reached as high as 37% at a state prison in Florence, Arizona.

The staffing levels are "unacceptable," because of a "lack of competitive compensation," Ryan said.

The prison system continues to lose employees to multiple competitors including the Maricopa County Sheriff's Office, the U.S. Border Patrol and the Federal Bureau of Prisons, he said.

Despite a recent 10% salary increase, 1,713 positions are estimated to be vacant by July 2021 if a further increase isn't funded, Ryan said.

There is also a need to increase non-correctional officer pay, because it "impedes ADC's ability to recruit highly qualified non-security applicants and retain top performers," he said.

Problems at the state's prisons have been worsened by an explosion of inmates, according to Ryan's letter. The prison population has increased from 3,000 inmates to more than 42,000 currently during his tenure as director.

Difficulties under Ryan's tenure are well known, such as failing infrastructure, and failure to fulfill improvements in inmate care, the newspaper reported. Ryan placed some of the blame on issues dating back to 2006, when the department reduced more than 550 correctional officers' positions.

Patrick Ptak, a spokesman for Ducey, said staffing "is a critically important issue," adding that a solution needs to address both pay and culture. The governor will review the budget request and all others "with an eye toward a balanced budget that prioritizes public safety and public education," he said.