Moss Mine may expand onto federal lands 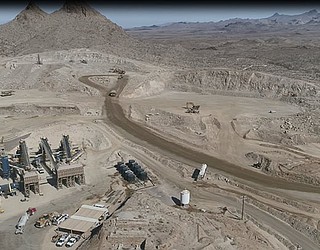 KINGMAN – Bullhead City mining company Golden Vertex Corporation has plans to expand the existing Moss Mine on to over 254 acres of federal land managed by the Bureau of Land Management.

The BLM will conduct an environmental analysis in accordance with the National Environmental Policy Act and make a decision.

On Monday, Sept. 16, Mohave County Board of Supervisors will discuss if the county wants to be part of the process.

The issue will be discussed during the board’s regular biweekly meeting at 9 a.m. at the County Administration Building, 700 W. Beale St.

“Moss Mine is already helping with the local economic development,” said Christine Ballard, division manager for Mohave County Planning and Zoning Department. “By economic development I mean jobs for local residents, but also money that flows to local vendors in the purchase of machines, parts and groceries.”

The Moss Mine is approximately 4.8 miles east of Bullhead City. It is comprised of 15 patented mining claims, all privately held by Golden Vertex Corporation.

Operations on the federal lands would include an open pit mine, an expanded heap leach pad, rock stockpiles, solution ponds, buildings, along with associated roads and infrastructure.

The company is looking at additional lands around the existing mining operation for exploratory drilling.

“The county would not be controlling the process,” Ballard said. It is the BLM who will conduct the analysis.

“But we can offer comments. There will be aspects and data that we know better than anyone else,” Ballard said.