Beale Street Theater: Coming to a city very near you 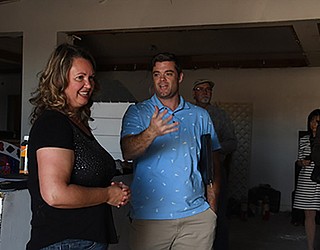 Kristina Michelson, left, and Matt Hecht point to a fountain that was built when the Beale Street Theater was a church. One of the Beale Street actors built the fountain with his brothers and father. (Photo by Vanessa Espinoza/Daily Miner)

The building has been a movie theater, a thrift shop, a church, a music store, a shoe repair shop and possibly other things. The next thing the Kingman Center for the Arts wants it to be is a fully functioning theater where they can put on their own plays for the community and provide a place for touring theater companies or bands to perform.

KCA has been working toward renovating the theater at the corner of Beale Street and Third Street. They recently held a conference so the public could learn more about the project.

Kristina Michelson, KCA executive director, said there have been different ideas on how to renovate the building.

During the conference, officials said the original restoration concept included seats for about 400, a lobby, art gallery, restrooms, a back stage area, the main stage, an area for the orchestra, balcony seating, a projection room and a media room.

One of the new ideas KCA has is to extend the stage out which will cut some of the seating area.

Many have donated to the renovation, and Angle Homes will match every dollar donated up to $100,000. That means a total of $200,000 can go toward the theater if the fundraising goal is reached. So far $50,000 has been raised.

Part of the grant money will go toward the architectural construction drawings of the building which could cost between $70,000 and $90,000. The grant would also pay for the early part of the renovation.

“We have met with an architect, Michael Taylor out of Prescott, and he’s come out and went on a tour of the building with us,” Michelson said. “He is currently working on the initial design plan for some things that we would like to see happen with the building.”

Once the plans are done and handed over to KCA, they will show the community what ideas were brought to the table and come up with a final design.

KCA will also work with a staging consultant to make sure the lights, sound and backstage access are done right the first time.

Michelson said the building will undergo a complete renovation. They had to open the walls and ceilings to view the electrical, plumbing and HVAC conditions but the structure of the building will stay relatively the same.

“What we have been told initially is that it all needs to be replaced,” she said.

At the conference people were given a tour of the theater and heard about the plans for the building.

The lobby will be a flex space. The stage is to be built out to where the first row of seats would normally start. On the west side of the building, the back would be the backstage area that would also serve as a workshop space and dressing rooms.

Matt Hecht, Beale Street Theater chairman, said the remainder of the west side of the building would be the public restrooms and toward the front it could be a retail space or a lounge area.

The building has been many things over the years. Some of the features of previous businesses are still around. The west end used to be a shoe repair shop and the lettering on the windows is still there.

Michelson said they want to hold onto that façade because it’s historic.

“We are trying to do our best to keep the styling in the same era as the rest of downtown businesses, that 1950s vibe, that Americana feel that people love coming into Route 66 and seeing the neon signs, and old cars and this is the goal to be the gem of downtown, nice and lit up,” Hecht said.

KCA has heard from various film festivals, touring musicians and bands that are passing by and would like to be able to play the venue.

“There is a lot of opportunity to bring some neat stuff to Kingman for the community to participate in,” Michelson said.

KCA will have a booth at the Mohave County Fair this weekend to answer questions and accept donations.

“If people can go donate there, it would be greatly appreciated,” Michelson said. “If a lot of people contribute small amounts of money it does add up over time especially with the matching funds.”

The last day people can donate for the matching grant is Monday, Sept. 30. Donations can be made at www.bealestreettheater.com.