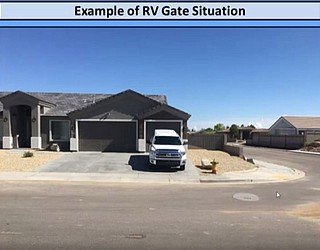 The amendment request came from Angle Homes in the hopes of alleviating safety concerns related to front-side setback requirements in Kingman. (Photo courtesy of the City of Kingman)

KINGMAN – The City Planning and Zoning Commission couldn’t come to a clear decision on what to do with a request to amend front-side setback requirements in a number of districts zoned residential.

In July, a similar, although City-initiated text amendment that would have seen front-side setback requirements set to 10 feet in residential districts, was not approved by commissioners. The new request came from Angle Homes.

Angle Homes requested the text amendment to the City’s zoning ordinance to address an “ongoing safety concern,” City staff explained. Angle Homes would like to see front-side yard setbacks in the R-1-6, R-1-8 and R-1-10 zoning districts changed to a minimum of 5 feet. Currently, setback requirements for those districts are 10 feet for R-1-6 and 15 feet for the other two districts.

For R-1-20, R-1-40 and Rural Residential districts, the request is for those same setbacks to be changed to a minimum of 10 feet. Front-side setbacks only apply to corner lots.

“New single-family homes have been built with driveways too close to the corner radius on corner lots,” explained City Planner Sylvia Shaffer. “As a result, vehicles are pulling out of driveways that are near the intersection. Another result is that homeowners with RV gates are using the handicap ramps for their RVs, boats and more to access and exit their property.”

She also said that fire hydrants are in danger of being struck by vehicles.

For example, the amendment permits Angle Homes to flip a house plan to allow for additional room by placing the garage near the interior side lot line. It also lets builders place primary structures closer to front-side property lines, which in turn provides more room for off-street RV and boat storage, alleviating safety concerns.

“I know it sounds like there is a lot of blood in the water about the last case that came here, and I don’t know much about that,” an Angle Homes employee told commissioners. “I just know that I have an ongoing safety concern and I think this is the best thing to address that.”

Commissioner Vickie Kress said she doesn’t like the idea due to safety, or more specifically visibility, and esthetic concerns. Commissioner Terry Shores also talked about safety concerns in relation to the change to smaller lots. Her concern for larger lots was that people would still be able to place a garage within the proposed front-side setback, even with the requirement that RV gates be placed on the interior side of the property.

“If you don’t have the space don’t build the house,” Kress said.

Commissioners Gary Fredrickson and Charmayne Keith were more accepting of the proposal. Keith made a motion that the amendment be approved under the condition that garages be placed in the interior, the same location as required for RV gates under the amendment. That motion did not pass, at which time Kress made a motion to deny the request.

The commission was split 2-2, with Kress and Shores voting to deny the request. The matter will now move on to City Council.