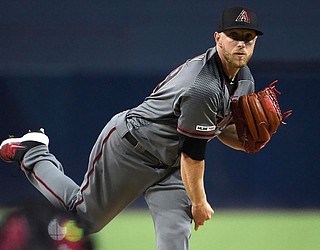 Merrill Kelly and the Diamondbacks lost consecutive games for the first time since Aug. 21-24 with a 3-1 loss Monday night to the Mets. (File photo courtesy of Arizona Diamondbacks)

NEW YORK (AP) – Pete Alonso sent a couple more pitches flying into the seats while Jacob deGrom's tosses kept darting in and out of the strike zone.

It all added up to a crucial win for the Mets.

Alonso hit two homers to take sole possession of the major league lead, deGrom struck out 11 and New York beat the Arizona Diamondbacks 3-1 Monday night in the opener of an important four-game series for both teams.

The Diamondbacks fell 2 1/2 games behind the Cubs for the second NL wild-card spot while the Mets remained four back. Chicago beat San Diego 10-2.

Alonso hit a solo drive in the first inning, then connected for his 47th home run in the fifth. He moved two ahead Mike Trout for most in the majors and closed within five of Aaron Judge's rookie record set two years ago.

"When they throw him strikes, he's going to hit the ball hard," manager Mickey Callaway said. "That's first and foremost. There's got to be some anxiety with pitchers having to face Pete. So, if he doesn't get on via hit, he's getting on via walk. He's just a great hitter."

Alonso set a team record by reaching base safely in his 34th consecutive game. The first baseman recorded his fourth career multihomer game and joined Daryl Strawberry as the only Mets rookie to get four multihomer games.

"We just made some mistakes in the wrong inning at the wrong time and he took advantage of them," Arizona manager Torey Lovullo said.

DeGrom (9-8) allowed one run and three hits in seven innings. He gave up a home run to former teammate Wilmer Flores in the fifth and little else.

"For him to throw the ball the way he did tonight, that was awesome," Alonso said. "That's Cy Young, vintage Jake deGrom right there. That was really special."

The reigning NL Cy Young Award winner recorded his 41st career double-digit strikeout game and ninth this season, tying Max Scherzer for the league lead. DeGrom struck out multiple batters in four innings and reached double-digit strikeouts when he fanned Ketel Marte with a fastball for the first out of the sixth.

DeGrom achieved his latest dominant performance by throwing his off-speed pitches more often. He threw his slider and changeup 57 times and got nine strikeouts on those pitches, including two to Marte, who struck out four times.

"It had a lot of movement tonight, probably more than it's had all year," deGrom said. "So I think we saw that early and kind of stuck with it."

DeGrom also pitched at least seven innings and allowed one run or fewer for the ninth time this year. Only Justin Verlander and Patrick Corbin have done it 10 times.

Seth Lugo pitched two innings for his fifth save.

Amed Rosario added an RBI single in between the Alonso homers.

The Diamondbacks fell to 11-3 in their last 14 games and lost consecutive games for the first time since Aug. 21-24.

Flores made his first appearance in Citi Field since signing with Arizona in the offseason. He tipped his helmet after receiving a standing ovation before his first at-bat in the second inning.

Flores also got video tribute before the game that ended with Led Zeppelin's "Thank You" playing as the videoboard showed him embracing Michael Conforto and Brandon Nimmo.

"It was a little weird because I was used to being on the New York side," Flores said. "But I met a lot of good friends there, good teammates. It was a special night."

Flores appeared in 581 regular-season games for the Mets since making his major league debut in August 2013. He is best known for his game-winning homer against the Washington Nationals on July 31, 2015, four days after nearly being traded to Milwaukee for Carlos Gomez and breaking down in tears.