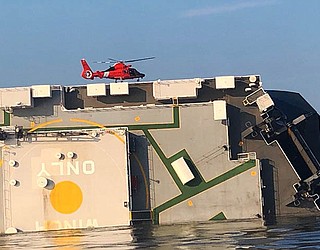 In this image released by the U.S. Coast Guard, a USCG helicopter hovers over an overturned cargo ship in St. Simons Sound, Ga., on Monday, Sept. 9. (U.S. Coast Guard photo)

JEKYLL ISLAND, Ga. – Coast Guard rescuers began pulling trapped crew members from a capsized cargo ship Monday, finding them alive more than a day after the vessel overturned while leaving a port on the Georgia coast.

Lt. Lloyd Heflin, who's coordinating the rescue, said responders had plucked two South Korean crew members from a room in the hull near the ship's propeller and were working on removing the other two.

Rescuers used a helicopter to land on the side of the Golden Ray and rappelled down the hull. They drilled a hole to communicate and found the crew members were "on board and OK," Heflin said. Then they set up a tent on the hull and began cutting through the steel to extract the men after deciding they could safely slice open the ship.

Rescue efforts broke off Sunday after responders determined a fire aboard the ship made it too dangerous to go inside. They were also concerned about the stability of the ship, which was carrying 4,000 automobiles, some of which may have broken loose.

The accident that happened as the ship left Brunswick early Sunday sparked fires and smoke. The flames were extinguished, but the huge ship was listing at nearly 90 degrees.

The 656-foot vehicle carrier is now stuck in the shipping channel, closing one of the busiest U.S. seaports for shipping automobiles.

A statement issued Monday by the South Korea foreign ministry said the crew members were isolated in an engine room. It said 10 South Koreans and 13 Filipinos had been on board, along with a U.S. harbor pilot, when the ship began tilting.

In the hours immediately following the accident, the Coast Guard lifted 20 crew members into helicopters before determining that the smoke and flames and unstable cargo made it too risky to venture further inside.

Position records for the Golden Ray show the ship arrived in port in Brunswick Saturday evening after making the short sail from a prior stop in Jacksonville, Florida. The ship then departed the dock in Brunswick shortly after midnight and was underway only 23 minutes before its movement stopped in the mouth of the harbor where it capsized, according to satellite data recorded by the ship-tracking website Marine Traffic.

The Coast Guard said it was notified of the capsized vessel by a 911 call at about 2 a.m. Sunday.

The cause of the capsizing remains under investigation. Marine Traffic shows the Golden Ray overturned as it was passed by another car carrier entering St. Simons Sound.

At the time, the skies were clear and the weather calm, with a southerly breeze of only 5 miles per hour, according to National Weather Service records.

The vessel is owned by Hyundai Glovis, which carries cars for automakers Hyundai and Kia as well as others.

Nearly 614,000 vehicles and heavy machinery units moved across Brunswick's docks in the 2019 fiscal year that ended June 30, according to the Georgia Ports Authority.