Not picking up shotgun shells can be costly 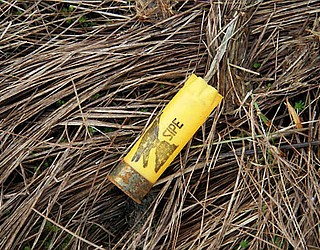 An empty shotgun shell left in the field can result in fines and possible license revocations for hunters. (Photo by Walter Baxter, cc-by-sa-2.0, https://bit.ly/2lHAsMC)

One of the biggest complaints that the Arizona Game and Fish Department receives from landowners is that dove hunters fail to pick up their empty shotgun shells.

Hunters are required by law to pick up their empties, as it is considered littering.

Littering while hunting under ARS 17-340 can result in hunters facing fines and possible license revocation for up to five years.

On opening day of dove season this year, I witnessed a large group of hunters shooting doves at a local stock tank.

When they left, I walked over to where they had been and saw not just one or two empty shells in a bush, but over 100 empty shotgun shells on the ground! In addition to many 12 gauge and 20 gauge empties that were regular dove loads, I even found several empty shells that had contained buckshot; which is not designed to be used to hunt doves. It is reckless and dangerous to discharge buckshot in areas where there are many hunters.

These hunters, which included a young child who was sharing the hunting experience with his family, just walked away.

I was going to call the AZGFD’s Operation Game Thief Hotline when Officer Brandon Carley from the Region 3 office of the Arizona Game and Fish Department arrived at the location. After checking our licenses and firearms, we told Officer Carley what fellow hunter education instructor John Schmidt and I had found.

We gave Carley a description of the people and of the vehicle they were driving.

Officer Carley said that he would be back on the second day of the hunt to see if the hunters returned. Carley would deal with them at that time.

True to his word, the next day Officer Carley was back at the pond at daylight. Unfortunately, the hunters did not return.

Officer Carley will be looking for these hunters and if he finds them, they could be facing some serious criminal charges for littering.

If you see hunters who aren’t picking up their empties, a friendly reminder to them could save them a citation or worse.

Cattle will ingest empty shotgun shells, and that could cause them serious injury or even death.

If you see a violation, don’t hesitate to call the Operation Game Thief hotline at 800-352-0700 and report it.