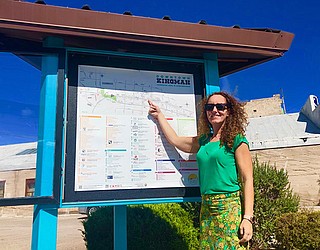 Jasmine Marin of Kingman Main Street was the first person to point at the downtown business map installed the afternoon of Friday, Sept. 6 at the corner of East Andy Devine Avenue and 3rd Street in downtown Kingman. (Photo by Agata Popeda/Daily Miner)

The first map of local downtown businesses is already hanging in a kiosk at the corner of East Andy Devine Avenue and 3rd Street. The map will serve tourists – who occasionally get lost in the expanding downtown – and locals alike.

“We are thinking about putting one up uptown, too” said Jasmine Marin from Kingman Main Street, the group behind this and many other downtown projects. “We often hear people uptown are not aware of all the cool things going on down here.”

The featured businesses paid $100 for special spots, but all downtown businesses are listed and the map will be updated each year. Soon, more maps will be installed, including at the Powerhouse Visitor Center, Locomotive Park and main trailheads.

The “Main Street approach,” a grassroots, nationwide project to revitalize historic downtown areas and foster economic vitality, was adopted by the Kingman City Council in the 1980s, but lacked funding. Understanding local and regional market data, and practicing sustained and inclusive community engagement, were always perceived as crucial elements of the project.

“It was about three years ago,” said group member Paul Gaines. “Councilwoman Jamie Stehly coordinated the state-level Main Street representative to come up from Phoenix and present to the community. Kingman Main Street was formed after that, but struggled for many months.”

The map was another of Sarah Ferry’s ideas. Her mother, Beth Ferry, is the group’s vice president.

“There’s a whole group of us,” said Marin, who is responsible for the logistics related to developing the map. “Our current interim president is Andrea McAdow, our secretary treasurer is Debi Vandevier. Diana Caldon did the registration of businesses for the map, and Paul Gaines was in charge of revamping the actual kiosk.”

Kingman Main Street is a city partnership with members of the community. They act according to the City economic development plan. The map was designed by a local artist, Alexandra Rice. The group continues to fundraise and looks to purchase more map display cases.

The first map at the corner of East Andy Devine Avenue and 3rd Street was installed Friday afternoon.