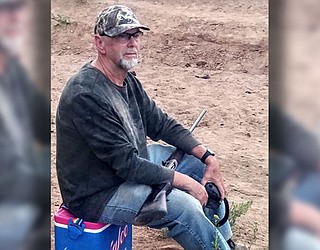 John Schmidt waits for a flight of doves near Kingman on Sept. 1. Local hunters have experienced mixed results during the early dove season that ends on Sunday. (Photo by Don Martin/For the Miner)

While some Kingman residents had a tough time finding doves on the first two days of the early season that opened Sept. 1, others found a lot of birds and had some great shooting.

Local sportsman Gary Siegfried was one of those sportsmen that had it dialed in. Siegfried and two friends from Nevada found a “honey hole” north of Kingman, and on opening morning, the three hunters each had a 15-bird limit in just an hour and half.

Officer Brandon Carley from the Arizona Game and Fish Department said that hunters he checked in the area toward Dolan Springs had done very well and he confirmed that Siegfried and his friends had limited out early.

On day two, Siegfried and his two friends were joined by another hunter from Boulder City, Nevada. Once more the group found a lot of birds and all four sportsmen limited out. A lot of southern Nevada residents come to Arizona for the opening of the annual dove hunt.

Local sportsman Mike Norris reported that on opening morning he had gone out by the airport to hunt but had not got one bird. Norris went back out in the afternoon to an area off Stockton Hill Road where he found cattle water. “I got my first-ever limit of doves,” Norris said. Norris said that he had only fired 20 shots to fill the 15-bird limit.

Kingman resident Courtney Martzen posted on Facebook that she had gone out with three other hunters and they all got their 15-bird limits on opening day.

Martzen said they went out for the afternoon hunt and started hunting around 2 p.m. Martzen said she used a 20 gauge semi-automatic shotgun.

Asked what they did with the doves, she said they made dove poppers.

On day two in the afternoon Martzen went out with some family members. She said she used a 12 gauge shotgun and did much better. She said it didn’t take her long to get a 15-bird limit.

Those doves were covered in garlic salt and cooked on the grill, according to Martzen.

Day three and once more Martzen was in the field with family. Still using the trusty 12 gauge, she said her shooting continued to improve and she was able to take her limit on another afternoon hunt. When asked why she doesn’t hunt doves in the morning like the majority of local hunters do, Martzen said: “I’m not much of a morning person!”

Note that Arizona dove regulations allow hunters to have a three-day limit or 45 doves in their possession. However, no more than 15 doves can be taken in one day.

Local sportsman Daniel Cude went out on Tuesday morning and found a pond that he said was “loaded with doves.” Cude said it didn’t take him long to get a limit and he saw no other hunters.

The early dove season closes Sunday, Sept. 15, and since there hasn’t been a lot of monsoon activity in the Kingman area, there will probably be ample birds out there for those hunters who want to pursue them.

Hunters who know where there are water sources are doing the best. But hunters who look for “green belts” in desert washes will also find doves congregate there.