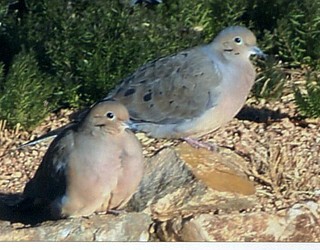 Mourning doves are the most common doves that hunters will see and hunt for, in the Kingman area. Photo special to the Miner.

With just a few more days before the September dove season closes, success or lack of it depends on who you have talked to.

For me, it was a couple of days of tough hunting. I had been scouting out a pond for a few weeks and had found a stock tank off Stockton Hill Road that had a lot of birds coming into it.

I even went out the morning before the season started just to confirm the birds were still coming in. They were, and I felt confident that fellow hunter education instructors Jay Chan and John Schmidt along with Jay’s brother Alan would do OK.

However, we were to get a huge surprise.

I figured to get to the tank about 7 a.m. and get my decoys out and set up my chair in the shade of some mesquite trees and get ready for the morning flight.

But when I arrived I found there were at least 12 different vehicles within a square-mile area, and hunters were everywhere!

Schmidt had got to the pond even earlier than I did, but he also found the area was full of hunters and there were areas to hunt around the pond we were at.

I had decided to use my .410 over/under shotgun for opening day, as I had seen plenty of birds in the area the day before and really wanted to test my shooting skills! With this little shotgun, whose shells hold just a half ounce of shot, you really have to be close and on your game in order to put the desert speedsters in your game bag.

After arriving I soon realized that there was no way I was going to be able to get close to where I had seen the birds the day before. Due to the number of people sitting around the pond, I would have to go to the periphery and get set up.

When the shooting started, it was fast and furious. A couple of times I could hear the hunters hollering “Here they come!” Five to 10 shots would follow.

When I heard some shot flying over my head, I decided to get into a ditch and stay low. There was a grove of mesquite trees between me and the other hunters, so I was semi-protected.

I got some decent shooting, and ended up with 10 birds for a box of 25 shells. Schmidt got 13 (the limit is 15 per day) while Jay and Alan, at another nearby water source, got about 10 each.

Not sure how many birds the group around the water got, but they fired a lot of shots. This evidenced by the many empties John and I found on the ground after they left.

After missing out on being able to hunt where we wanted to hunt on opening day, John and I decided we were going to get to the pond very early on day two of the season.

I arrived about 5:30 a.m., and John showed up a few minutes later. No one was at the pond.

We got the decoys out and got ready for what we thought was going to be a good morning of shooting. Wrong!

Even though a couple of other vehicles with hunters did eventually show up, they weren’t the group from the day before, and we had the “good spots” to ourselves.

But as daylight came, much to our chagrin, only a few doves came in. A group of four flew in and John downed a pair with three shots from his 20 gauge while I fired one shot out of the .410 and put down a bird.

Little did we know at the time but that would be all we would get! The birds had moved out and we didn’t know why. There was a storm that had moved through the area, but there was little rain.

John went home, Jay and Alan hunted in another area with no luck and I went back to Meadview. Sure doesn’t take long to dress out one dove.

Monday afternoon I went to another spot that had a cattle/wildlife drinker. When I pulled up, there were more birds that flew off than I had seen all morning at the other spot.

Maybe, just maybe, I could get some action.

With the decoys out I sat and waited. A few birds drifted in but with less than 30 minutes of legal shooting time left, they really came in.

Despite my subpar shooting with the .410, I did manage to get five.

Due to other commitments I haven’t been able to go out again to look for birds. But even though I failed to bag a limit for the first two days, it was fun for the most part and now I know that my shooting skills aren’t quite as sharp as they were last year.

Now I regret not having gone to the Mohave Sportsman Club’s skeet range to shoot a few rounds of skeet before the season opened.

Dove season ends on Sunday, Sept. 15 so there is still some time to go out and try and bag some doves.