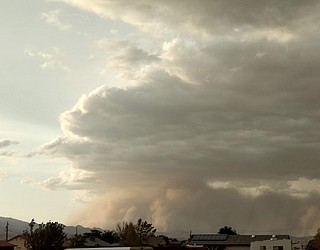 Monsoon clouds are shown over Kingman. Rainfall has been sparse across the Southwest this summer. (Daily Miner file photo)

Got something on your mind? Tell us about it in 40 words or less.

Misconduct accusations in schools – In regards to teacher misconduct, I resigned my teaching position due to the disrespect and abuse I was subjected to by middle school students. False allegations and rumors perpetrated by disgruntled students is common practice in the profession. Not worth it!

The anti-smoking folks have a new strategy. Let’s put ugly photos on the packaging. Tell people how bad smoking is. Make them cost a small fortune per pack. Most states can’t afford to lose the tax the smokes bring in!

What the booing of Andrew Luck says about us – “Don’t criticize a man until you’ve worn his cleats.” Prophetic words that should be heeded by the guy in the White House.

Monsoon season – Made it through the monsoon season unscathed? What monsoon season? Are you kidding? I can’t even remember what rain looks like, it’s been so long. My trees and I are both parched. Please God, bring on a monsoon.

Thank goodness for our Police Department, catching the most disgusting child predators. May God Bless you all, and be safe.

It’s about time we put tariffs on China. We’ve been importing their poison dog food, lead-painted toys, just to name a couple. Yet, we still think we owe them something? I will gladly pay more for American made!

I’m sick of AP left wing Trump-hating stories. These two never heard of “no pain, no gain” apparently. They would prefer to put Trump down; go on with the past administrations letting China steal us blind? Hey, weinies, Trump has guts.

Let’s End Agreement for Migrant Kid Detention – Here’s an idea. Build the wall. Don’t let anybody in or maybe start allowing other than Hispanic people to come for a change. Four-hundred t housand with children since 10-2018, 70,000 unaccompanied? Insanity. Child abuse by their own parents. Why should we pay?

DACA is done! When you look at the numbers, that should be quite enough. This is not our responsibility. The U.S. needs to tighten up the purse strings for those who are not AMERICANS. Started years ago with anchor babies.

Let them howl, Boris! – Yes. Let the autocrats of the world do whatever they want, right or wrong. After all, most autocrats know the working classes are a bunch of dummies who don’t have money or influence. We don’t matter anymore.

Gosar: To call Comey a clown would be offensive to the carnival community – Our governing body in Washington is so divided, I am not sure we will ever come together as a nation again. When does the Second Civil War start? Can I buy my way out of the draft?

China tariffs – Do you really think this ‘Acting Administration’ in Washington gives a rat’s you know what about the common people who will be affected? Maybe the Chinese cargo ships will fall off the edge of the Earth before they get here.

Gosar: to Call Comey a Clown would be an offense to the carnival community – And who would know more about the carnival community than our Congressman, a man who idolizes the Biggest Carnival Barker of all! Perhaps Gosar’s real issue is that Comey told the truth; something Gosar clearly struggles with regularly.

All Rants and Raves are subject to editing. Submit RANTS AND RAVES at kdminer.com/rants-and-raves or email editorial@kdminer.com.