Arizona bounces back with 65-41 rout over Northern Arizona 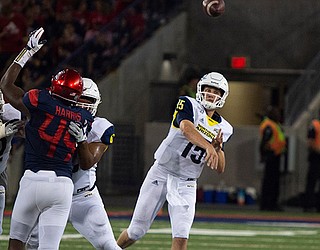 TUCSON — Arizona rallied from a season-opening loss by scoring quickly and building an insurmountable halftime lead.

The Wildcats let down in the second half and had too many penalties to be satisfied completely with the win, particularly with the schedule about to get a whole lot harder.

Gary Brightwell ran for 141 yards and a touchdown on five carries, Khalil Tate accounted for three scores and Arizona bounced back from a disappointing opening loss by routing Northern Arizona 65-41 on Saturday night.

"I'm happy about the win, but there's a lot of things that I'm not very happy about," Arizona coach Kevin Sumlin said. "I addressed that in the locker room and we're going to continue to address that."

Arizona (1-1) had an extra week off to think about its opening loss to Hawaii.

The Wildcats took it out on the Lumberjacks (1-1) early, scoring on touchdowns on their first seven drives and racking up 517 yards while setting a school record for points in a half for a 51-13 halftime lead.

Tate hit 13 of 15 passes for 142 yards and threw two touchdowns to Tayvian Cunningham before being replaced by Grant Gunnell with 7:56 left in the second quarter.

The second half was a different story. Arizona's offense stalled, the defense gave up some big plays and the penalties piled up — not what they want with a prolific Texas Tech team coming to the desert next week.

"We aren't satisfied for sure," said Tate, who threw two passes in the third quarter before sitting for good. "We didn't play collectively as well as we should have."

Coming off an opening win against Missouri State, Northern Arizona had a few good offensive moments against Arizona, but dug too a deep of an early hole to ever have much of a chance.

Case Cookus threw for 373 yards and two touchdowns with two interceptions for the Lumberjacks.

"Every play, even when you win, you've got to take something away," Cookus said. "I made a lot of mistakes, there's guys across the board who made mistakes and they're a good football team, going to win a lot of football games."

Arizona's onslaught started on the opening drive. Tate hit Cunningham on a 47-yard score. Next series, Taylor broke free for a 49-yard run, then scored on a 25-yard burst up the middle.

Brightwell made it 21-0 midway through the first quarter, making one defender miss and racing past the rest on a 94-yard touchdown run, tied for second-longest in school history.

Tate went in untouched on a 1-yard run , then found Cunningham for a second time, on an 8-yard TD pass before heading to the bench.

Gunnell stepped in and threw TD passes on his first two collegiate drives, hitting Drew Dixon on a 9-yarder and Thomas Reid III on a 75-yarder.

Northern Arizona never stood much of a chance against the bigger, faster Wildcats, but the experience could help once the Big South season hits.

Arizona bounced back nicely from the Hawaii loss with a dominating performance, even if it was against an FCS opponent.

Cookus was limited to two games in 2018 due to a broken collarbone and could have left NAU as a graduate transfer, but opted to return as a fifth-year senior. His return was a huge boon to the Lumberjacks and he's had a solid start to the 2019 season.

Cookus made some superb throws while completing 28 of 48 passes against Arizona after throwing for 290 yards and two scores against Missouri State last week.

"He's worked his tail off to get back from his injury," NAU first-year coach Chris Ball said. "He's a great leader, he's extremely smart, has a great arm, he's tough, probably the most competitive guy I've been around."

Sumlin was not pleased with the defense in the second half, but was more concerned with the penalties. Arizona had 11 penalties for 127 yards, many on personal fouls.

"Too many selfish penalties, things we're not going to tolerate," Sumlin said. "The penalties we had today are not OK. It's not about you, it's about us and some of those penalties were about you."