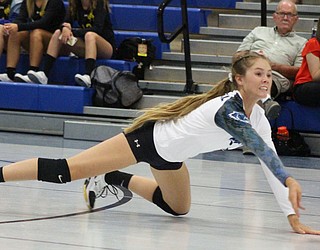 Kingman Academy junior Cynda Campbell stretches out for the ball Thursday night in a 3-1 win over Wickenburg. (Photo by Beau Bearden/Daily Miner)

KINGMAN – A dominating performance in the opening set of a match usually forecasts a quick and easy sweep.

But that was not the case Thursday night as the Kingman Academy High School volleyball team experienced a minor letdown before battling back for a 3-1 win (25-11, 12-25, 25-12, 25-11) over Wickenburg at Betty Rowe Gymnasium.

“In the second set we kind of brought ourselves down and we weren’t really communicating,” said Lady Tigers senior Gabi Lobue. “When someone made an error, we didn’t pick ourselves back up. But in the third and fourth sets, we picked ourselves back up and started communicating. We just started to believe in ourselves.”

That belief was on display in the first set as Academy jumped out to a 13-0 advantage and kept the pedal to the metal for a 1-0 lead. But the Lady Tigers let off the gas a little in the second set and it proved costly as Wickenburg tied the match.

“The girls need to come out fired up in every single set – no matter who is on the other side of the net,” said Academy head coach Bill McCord. “That’s what they still have to figure out and it haunted us last year. But as soon as the girls lost the second set, they realized Wickenburg came to play and they better pick it up.”

It didn’t take long for the Lady Tigers to do that and play as they did in the opening set. Academy jumped out to 3-0 leads in both the third and fourth sets, but the Lady Wranglers did put up a fight in the fourth.

The Lady Tigers held a slim 8-7 advantage before they scored three straight points to force a Wickenburg timeout.

The break from the action didn’t help the Lady Wranglers and Academy finished off the match for their second win of the season.

It was also a much better team performance than Tuesday’s 3-0 win at Mohave Accelerated.

“We had so many service errors against MALC,” McCord said. “We had 31 errors that night in a three-set match. That’s a lot of errors. I don’t think we had that many tonight in four sets.”

However, it is worth mentioning that the Lady Tigers are still searching for their optimal rotation. That will work itself out as the season progresses, but one area isn't lacking.

“We have some pretty good servers on our team,” McCord said. “When the servers get going, they get going. Like Grace (Stutler). I brought her in just for her serving. She is fantastic. She showed the other night – she’s just hitting the ball really well.”

Stutler and Academy (2-0, 1-0 3A West Region) are back in action Saturday at the Mary Jo Goldey Invite in Lake Havasu.

“We just haven’t gotten in that groove yet,” McCord said. “And the good part of it is there are other people that are able to pick up the slack. It’s playing pretty even right now.”