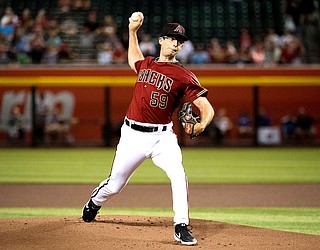 Zac Gallen tossed a one-hitter with eight strikeouts and one walk Wednesday night as the D-backs beat the Padres 4-1. (Photo courtesy of Sarah Sachs/Arizona Diamondbacks)

PHOENIX (AP) – Even before Manny Machado singled into right field, Zac Gallen knew it wasn't his night to throw a no-hitter.

The rookie right-hander took a no-hit bid into the seventh inning, Ketel Marte hit a grand slam for his 30th homer and the Arizona Diamondbacks beat the San Diego Padres 4-1 Wednesday to complete a three-game sweep.

"I took a look at the pitch count and I knew it probably wasn't going to be possible," Gallen said. "I just tried to get it going as long as I could."

Gallen pitched seven hitless innings in the minor leagues earlier this season, but that was as close as he'd ever been to a no-hitter.

"Another night of outstanding pitching and it carried us throughout the entire night," Diamondbacks manager Torey Lovullo said. "I was probably the most nervous guy in the stadium, because I was trying to figure out how I was going to take him out of a game if he had a certain pitch count."

Marte's slam off Luis Perdomo set Gallen up for the victory and gave the surging Diamondbacks their ninth win in 10 games.

Machado broke up Gallen's no-hitter with a line drive with one out in the seventh. Diamondbacks right fielder Jarrod Dyson set up as if he was going to try to throw out Machado at first base, but he bobbled the transfer.

With the Chicago Cubs idle Wednesday, the Diamondbacks moved within three games of the second NL wild card.

Wil Myers homered in the ninth, his 16th of the season, for the Padres' only run. The Padres got the tying run up to bat in the ninth, but Archie Bradley got Hunter Renfroe on a broken-bat ground out for his 12th save and stranded runners at second and third. San Diego had just three hits.

Gallen got out of potential trouble in the first inning with help from teammate Josh Rojas. With San Diego's Greg Garcia on third base after being hit by a pitch and advancing to third on a fielder's choice, Machado lined out to Rojas in left field. Rojas fired a strike to home plate to get Garcia trying to score.

"I never thought I was going to have 30 homers," Marte said. "I just feel good. I feel strong up there and I put my best swing and I'm never looking for the homer."

D-backs: LHP Robbie Ray (12-7, 3.97 ERA) gets the ball at Cincinnati in the opener of a three-game series Friday. The Diamondbacks have six games remaining in the regular season against the Reds, with three more at home.