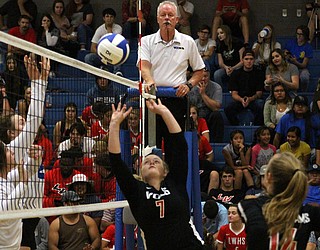 Lee Williams' Kaitlin Echeverria sends a ball over the net as two Lady Bulldog defenders try to send it back Tuesday night at Kingman High. The Lady Vols tallied a 3-0 sweep to improve to 7-2 all-time against their crosstown rivals. (Photo by Beau Bearden/Daily Miner)

KINGMAN – The rivalry between the Lee Williams and Kingman high school volleyball teams has mostly been one-sided over the years. The Lady Vols entered 2019 with five straight victories over their crosstown rivals and hadn’t lost since 2015.

“It definitely helped both teams get better,” Lady Vols head coach Riley Blake said of the competitive match. “Our team needs to work on fighting back and staying focused. Kingman fought hard and I was impressed with that. The girls weren’t expecting that, so we have to be ready at all times.” 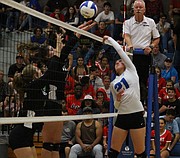 The final set was the best of the evening as Kingman rallied back from an early deficit to knot the score at 20-20. Blake quickly called a timeout, but the Lady Bulldogs responded after the break to take just their third lead of the night at 21-20.

The set was tied two more times (21-21 and 22-22) before Lee Williams notched three straight points for the sweep. The final point didn’t come easy as the Lady Vols had to withstand a back-and-forth rally to get the win.

“I’m glad to see us jump out to leads,” Blake said. “It started off a little bit slow, but the girls were able to pick it up and keep it going. We just have to be able to finish it, which we did this time. But we have to focus on that in practice a little bit more.”

Meanwhile, it was a much better outing for Kingman after it struggled last week during a scrimmage against Lee Williams.

“I hoped that it was going to help us be a little bit better,” Benson said. “But the girls did phenomenal. Lee Williams is one of the top two teams that we play every year. So to be that close – I’m happy. The girls did a good job of keeping up. There were a lot of really good digs in the back row and we had some solid blocks.”

The Lady Vols also showed a number of positive signs in their first action of 2019.