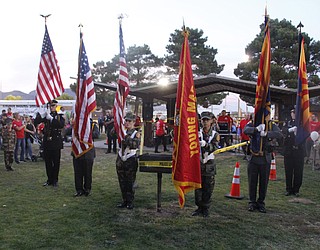 Young Marines Cpl. Carroll and L.Cpl. Buck are joined by the Kingman Police Dept and the Mohave Co Sheriffs Office in presenting colors and the Annual Walk Away from Drugs that was help on October 16 2019.

The Kingman Young Marines, under the command of Marine Lt. Col. Robert Skankey was recently named Young Marine Unit of the Year for the program’s Black Sheep Battalion.

The Young Marines, structured similar to military organization, are broken into units, battalions, regiments and divisions. The Kingman Young Marines are one of five units in the Black Sheep Battalion. This is the second time the Kingman Young Marines have won this honor, having received it the first time in 2017. Their success can be traced to the hard work of the volunteer adult leaders and especially the young men and women of the unit.

This was an especially rewarding year for the unit as Young Marine Corporal Carisa Carroll, 15, was also recognized as the battalion’s Young Marine of the Year. It is her second time to receive this high designation.

The foundation of the Young Marines is built upon the principles of Leadership, Teamwork, Discipline and a Drug Free life style.