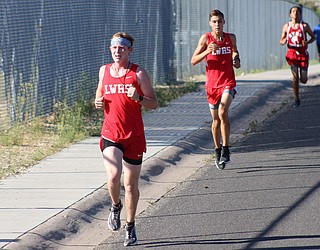 KINGMAN – It was another successful outing for the Lee Williams High School cross country team as the Vols and Lady Vols each finished second Wednesday at Running the River.

Meanwhile, Alexis Hecker finished fourth for the Lady Vols at 24:14, followed by Kingman Academy’s Sara Bredenkamp in sixth (24:45) and Lee Williams’ Katalina Robinson in seventh at 24:54.

Kingman’s Lily Smith ran a 25:24 for ninth, while the Lady Vols pair of Rachel Strong and Elizabeth Strong finished 11th and 15th, respectively.

Lee Williams, Kingman and Kingman Academy are back in action Saturday at the Ray Gomez Invitational in Bullhead City.

At Northwest Christian, the Lady Tigers couldn’t find an answer on the road Wednesday night in a 3-0 sweep against the third-ranked Lady Crusaders.