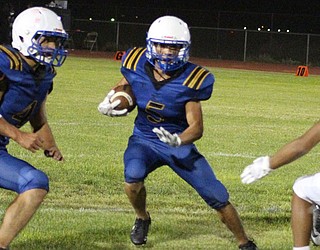 KINGMAN – There is no question about it, the Kingman High School football team has a tough task at hand Friday night.

The No. 25 ranked Bulldogs are not only facing a defending state champion, but they’re also going on the road to battle a third-ranked Northwest Christian squad that has won four straight.

“It’s going to be a tough one, but a good opportunity,” said Kingman head coach Russ Stryker. “The young guys are excited about it. That’s kind of the game plan going in – get everyone a bunch of reps, go down there and give it heck and hopefully keep everyone safe. Then get back home and try to win the last game (of the season).”

It wasn’t a close contest a year ago as the Crusaders rolled to a 72-6 victory on their way to a 3A State Championship. However, there is a silver lining for the Bulldogs.

“I want our young guys to know what it’s like to play a state champion,” Stryker said. “It’s just different – they’re stronger. If everything lines up right with the transition to a different conference, I think these freshmen and sophomores could make a playoff run. But they have to know the kind of dedication it takes in the weight room and elsewhere to transition to a playoff-caliber team.”

And Kingman has plenty of youth waiting to step into the limelight as 16 seniors will depart after this season. But that experience also gives the Bulldogs some hope they can find success.

“I believe that we can move the ball on Northwest,” Stryker said. “They have big, strong linemen, but I think we’ll move the ball on them. There’s just not a lot of room for error. If you make a mistake, they’re going to capitalize on it.”

Miscues are definitely something to avoid as Kingman has run into its fair share of issues when they turn the ball over. The Bulldogs (4-3, 1-1 3A West Region) will have a full roster though and Stryker expects everyone to contribute.

And it will be needed as the Crusaders (6-1, 2-0) have leaned on a pair of running backs this season. Austin Young has racked up 1,126 yard and five scores, while Grant Gibson has 359 yards and 14 touchdowns.

It will be difficult, but Kingman is taking it in stride as it will be its second to last game of the season.

The Bulldogs were expected to end the year Nov. 1 at home against Kingman Academy, but the Tigers had to cancel the remainder of their season this week due to lack of numbers.

“That’s a really big blow for everybody,” Stryker said. “I feel bad for all of us and I feel bad for the Academy also. We wanted that game.”

That makes Kingman’s Oct. 25 road game at Wickenburg the final contest of the 2019 season.

However, the seniors will be honored prior to the volleyball contest at 6 p.m. Tuesday, Oct. 29 against Wickenburg.