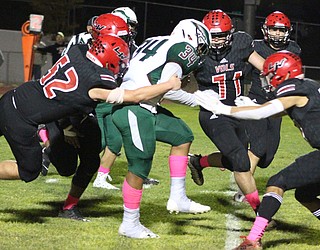 A pack of Volunteers, including Luigi Garibaldi (52) and Zach Allen (71), try to bring down Flagstaff’s Luis Jaramillo. (Photo by Beau Bearden/Daily Miner)

KINGMAN – Sometimes it is just not your night no matter how much effort you put forth on the field. That was the case Friday as the Lee Williams High School football team couldn’t find the end zone in a 13-0 loss to Flagstaff.

“Our kids competed really well – I was proud the way they competed all game long,” said Vols head coach Patrick O’Boyle. “We fought pretty hard, but they made a couple more plays than we did. That’s just the way it went tonight. We got out-coached – I’ll take that, I’ll own that. But we’re going to get back to the drawing board, watch some film and try to correct our mistakes.”

No. 21 ranked Lee Williams was locked in a defensive battle for most of the first half until No. 28 ranked Flagstaff’s Stephen Canizales returned an interception for a touchdown at the 3:13 mark of the second quarter.

The Vols kept the Eagles’ top threat Luis Jaramillo in check for most of the game until the senior finally found the end zone in the fourth quarter for the final tally.

“Our defense played phenomenal,” O’Boyle said. “We just didn’t make the plays on the offensive end that we needed to make. That was the difference in the ball game. But testament to them – they are well-coached and they played really, really well. They came out and made some plays when they needed to make them.”

It doesn’t get any easier for the Vols (3-3, 1-2 4A Grand Canyon Region) as they hit the road to battle undefeated Coconino.

“Coconino is a well-oiled machine right now,” O’Boyle said. “We have to bear down and get tough. We’ll see what we’re made of next week.”