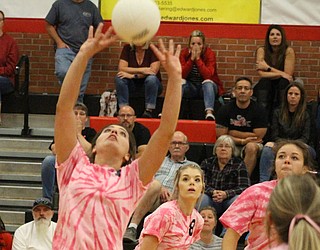 Lee Williams' Lorelei Fernandez sets the ball Wednesday night during a 3-2 win over Coconino. It was a historic victory for the Lady Vols as they notched their first season sweep of the Lady Panthers in program history. (Photo by Beau Bearden/Daily Miner)

KINGMAN – The true test of any team is how it responds to adversity – the great squads find a way to persevere, while others fold under pressure.

“Coach just told us this is going to determine whether we’re a good team or a great team,” said Lee Williams senior Lorelei Fernandez. “Obviously we fought and stayed in the game. No matter how difficult it was, we all stayed together as a team, worked together and finished with a win.”

And Fernandez helped clinch the victory with a hit that clipped the net and sent the ball unexpectedly to the Lady Panthers’ side of the court. It gave the Lady Vols a 14-12 advantage and proved to be the nail in Coconino’s coffin.

“That was extremely lucky,” Lee Williams head coach Riley Blake said of Fernandez’s hit. “When I saw her get up to swing, I wasn’t so sure it was going to work in our favor. It ended up being a trick play – maybe not intentional, but it worked out.”

And the luck will help make history as Lee Williams tallied its first season sweep of Coconino in program history. It wasn’t easy though, as the Lady Vols had to play their second consecutive five-set match on back-to-back nights.

“The girls are playing really well,” Blake said. “Sometimes we kind of dig ourselves that hole, but I’m so proud of them for being able to fight back and come back and win. Coconino is a great team and they played really hard. It was a fun match to watch.”

It sure was as Lee Williams found itself in a back-and-forth battle with the No. 21 ranked Lady Panthers. The Lady Vols pulled away in the first set for a 1-0 advantage and appeared to be on their way to 2-0 lead before Coconino rallied to make it interesting.

Both squads traded points down the stretch before the Lady Panthers squeaked out a win to knot it 1-1. That momentum carried over to the third and Lee Williams found itself facing a 2-1 deficit one night after rallying from a 2-0 hole against Mohave.

“It’s not a great situation to be in, but the girls play hard and they don’t give up,” Blake said. “That really shows the difference between a good team and a great team. Right now they are playing like a great team.”

The Lady Vols lived up to Blake’s words as they pulled away midway through Set 4 and held on to force a winner-take-all fifth set where they dug deep and tallied their fourth straight victory.

“We always love playing Academy – it’s always a good match,” Blake said. “I hope a lot of people come to watch and support.”