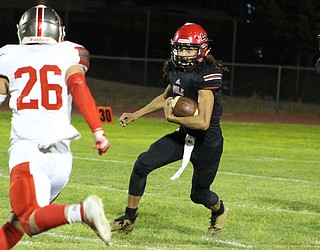 Devean Santos and the Vols are back in action at 7 p.m. Friday against region foe Flagstaff. Lee Williams is coming off a 42-27 win over Mingus two weeks ago. (Daily Miner file photo)

KINGMAN – The Lee Williams High School football team has already passed the midpoint of the season and that’s usually when a squad is playing at its best.

However, the remaining four games could not be more important in a wide-open 4A Grand Canyon Region. You don’t have to tell that to the Vols though, they know that and they’re focused on making steady improvements each week.

“We definitely feel like we’re getting better right now, but we still have a long ways to go to see where we think we can get,” said Lee Williams head coach Patrick O’Boyle. “We’re going to take it one game at a time, and our main concern is playing well Friday night. But again, we do feel good as a program right now with where we’re at, but we don’t want to settle. We don’t want to say, ‘Hey, we’re OK with being right here where we’re at.’ We want to always continue getting better and we strive to do that every day at practice and every Friday night.”

“Flagstaff does some really, really nice things,” O’Boyle said. “Their running back (Luis Jaramillo) is extremely good and they play some decent defense on the backend of things. So we’re going to have to be sound tacklers, be physical up front and play our style of football.

Jaramillo will surely be someone to keep an eye on as the senior has racked up 500 yards and seven touchdowns, while Stephen Canizales is next with 189 yards and two scores.

Lee Williams will have a slight advantage though, as it had an extra week to prepare.

“It was nice last week, we were able to get out of pads a little bit and get back to being healthy,” O’Boyle said. “We had a couple of guys banged up, but again our focus in on Flagstaff and getting better. We know we’re going to have to play well in order to give ourselves a chance to be successful.”

And a win would go a long way in helping the Vols make their first state playoff appearance since 2014. Lee Williams’ chances are also increased with the new Open Division State Tournament that takes the top eight teams from the 4A-6A conferences combined, based on rankings.

If the season ended today, two 4A conference teams would advance to that bracket and that would inch Lee Williams closer to a berth in the 4A State Tournament.

However, O’Boyle is focused on what the Vols can control.

“We do a very, very good job as a coaching staff of not watching standings or rankings,” he said. “Obviously things are going to take care of themselves at the end of the year the way they should. Things are going to work out however they may. Again, that’s something we can’t control. All we can do is control the way we play. If we take care of business, then things should work out for us in the right way.”