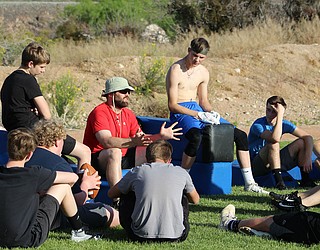 The Kingman Academy High School football team had to cancel its second game of the season as the Tigers won't host Wickenburg at 7 p.m. Friday at Southside Park. (Daily Miner file photo)

KINGMAN – It is not often a squad is worried about losing athletes to illness or grade checks. Usually the “next man up” mentality comes into play, but the Kingman Academy High School football team doesn’t have that luxury.

The No. 29 ranked Tigers have battled low numbers all season and that struck again as they had to cancel Friday's 7 p.m. Homecoming contest with Wickenburg at Southside Park.

“It’s hard for the kids,” said Academy head coach John Morgando. “They’ve had to drop two games this year due to numbers. And it’s really hard on the 12 or 13 that we had this week that are putting in the time and the effort. They’ve been consistent all year and they’re essentially the ones that get letdown. They’re putting in all the time and effort.”

However, it takes more than 12 or 13 athletes to take the field for a varsity contest and safety is the No. 1 priority, especially since there were only three available linemen this week.

The Tigers hoped to get a few players back from illness, but that never materialized and the game was canceled Thursday morning.

“They want to play, but at the same time if I show up with 12 kids and Wickenburg drives two and a half hours to get here and one kid that’s a linemen goes down with cramps, I’m throwing in the towel,” Morgando said. “Then what to you do? It’s a safer situation to avoid that – even though the heart is willing, sometimes the flesh isn’t able.”

And the more important question going forward is whether the Academy will cancel the rest of the season. The Tigers only have three games remaining, but an important one looms Nov. 1 against crosstown rival Kingman High.

That is still a few weeks away and Academy plans to make a decision well before that game arrives.

“It’s something we’re talking about as a team and we’re going to decide pretty soon,” Morgando said of canceling the rest of the season. “It’s definitely something you have to discuss because realistically numbers aren’t going to get a ton better. The season has played its course in some ways with injuries and losing people here and there. It’s in discussion and we’re going to decide pretty soon.”