Prep Football: Bulldogs look to bounce back against Chino Valley 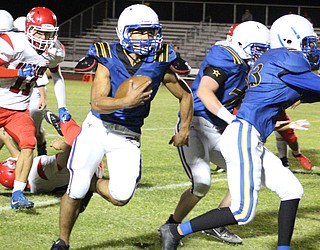 KINGMAN – It is not too surprising to see athletes upset and hanging their heads following a blowout loss at home. That is usually the case at any level, but the Kingman High School football team didn’t show too much grief following last week’s setback to River Valley.

The Bulldogs instead turned the page and shifted their focus to writing the next chapter of the season.

“They have hope because they can see, for all intents and purposes, the program is going in a positive direction,” said Kingman head coach Russ Stryker. “So they seem to kind of take it in stride, which was really good. Monday we got here and the kids were ready to go. They were all for it and upbeat. So it’s promising. They feel confident and they feel good about the opponent this week.”

And that opponent is No. 31 ranked Chino Valley at 7 p.m. Friday. The Cougars (2-5, 0-1 3A West Region) are back in Kingman for the second straight week after losing to Kingman Academy 27-26 last week at Southside Park.

The Bulldogs look to deal their region foe another loss, but they’ll be without Gavin Randall and Joey Drumright as the pair will be in concussion protocol until next week.

That doesn’t worry Stryker though.

“Chino Valley looks like they’re struggling,” he said. “And my JV team last year at Lee Williams played them, which are basically the kids we’re going to play Friday. It was like 56-6 and the six points as against our 3s and 4s with like 30 seconds left in the game.”

However, Kingman has dealt with its fair share of struggles in the last two games – turning the ball over six times. The Bulldogs look to avoid those miscues this week and will put the ball in the hands of Austin Dias.

“Turnovers have hurt us,” Stryker said. “We’ll go back this week to what got us in the position we’re in right now, which is giving Austin Dias the ball and let him eat. I think he’ll have 200 yards this week. That’s the mindset going into this game. And we’ll have a healthy Malakai Bell and he didn’t play last week.”

The duo will be important to Kingman’s success and Stryker expects Dias to get most of the workload against Chino Valley.

“Austin will get at least 25 touches this week,” Stryker said. “I want to see him get after it and I think he can do the same thing the rest of the season.”