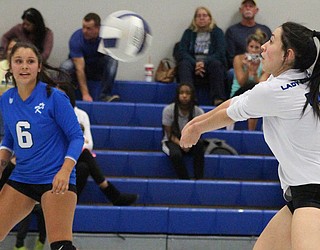 Kingman High’s Elvira Torres makes a pass as Emilee Araya looks on during a match earlier this season. The Lady Bulldogs picked up a 3-2 win over Chino Valley on Tuesday night. (Daily Miner file photo)

The victory was Kingman’s second in its past four matches and moved Kingman to third in the 3A West Region standings. The Lady Bulldogs’ best finish in the region was fifth in 2016, the inaugural season of the 3A West Region.

At Mohave, the Lady Vols had to dig themselves out of a 2-0 hole, but they managed to complete the comeback Tuesday night to knock off the Lady T-birds in five sets.

At Laughlin Ranch Golf Club, the Lee Williams High School boys golf team narrowly held off Mohave Accelerated Tuesday afternoon with a 26-over 170 to take first. MALC finished second with a 28-over 172, while Kingman High was third.

Cole Finch tallied a second-place finish for the Vols with a 2-over 38, followed by Robert Brackett in fourth (5-over 41), Brady Clark in fifth (7-over 43) and Trevor Taylor in seventh with a 12-over 48.

Kingman’s Coleton Padilla was ninth with a 15-over 51, while Kirk Potokar, Camaron Haller and Robert Walker finished 13th, 14th and 15th, respectively.

Lee Williams and Kingman are back in action at 2 p.m. Tuesday at Cerbat Cliffs Golf Course.