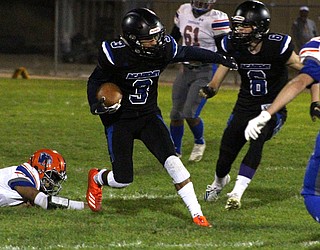 The Kingman Academy High School football team lived up to that saying Friday night as it battled to a hard-fought 27-26 win over Chino Valley at Southside Park.

“It was a boxing match,” said Tigers quarterback Charlie Anderson. “It was back and forth, tensions were high and there were lots of penalties. But we found a way to get it done. We had a couple of underclassmen step up and they did well.”

It was no doubt a team win, but Anderson played a crucial role in the victory by connecting with Gabe Imus for the game-winning touchdown with 5:04 remaining.

And it couldn’t have come at a better time as the momentum was clearly in Chino Valley’s corner.

The Cougars trailed 21-12 at halftime, but scored 14 unanswered points for a five-point lead with less than seven minutes to play. It was do or die for the Tigers and they responded on fourth down as Anderson had just enough time to find Imus on a 30-yard strike for six points.

“It wasn’t quite supposed to go that way, but it did,” said Academy head coach John Morgando. “Charlie (Anderson) made the throw and Gabe (Imus) made a great catch and finished it. That’s all you can ask for – occasionally the play doesn’t work like you want to, but to make a big play out of it is huge. It worked out for us and those two kids came up big. And a lot of people did.”

The offense stepped up in crunch time, but it was the defensive unit that kept the Tigers in the game with five takeaways and two touchdowns.

Matthew Eads recovered a fumble in the end zone for a score, while Anderson returned an interception for six points.

“I really have to give our guys a hand for the effort this week,” Morgando said. “Our defense is playing pretty lights out despite letting people score here and there. We’re getting big plays – we had three scores on defense against Coronado and we had two scores on defense this week and three big picks. It’s a testament to the kids working hard and playing hard because they don’t get a lot of reps there during the week.”

Academy lived up to Morgando’s words late in the game as the defense stopped Chino Valley in its tracks with a pair of interceptions.

The first pick appeared to seal the game for the Tigers, but the Cougars notched an interception of their own to make things interesting. But another pick by the Tigers gave them the victory.

“To get a win against a region team is big,” Morgando said. “You win the region, you make the playoffs regardless of everything else. So we want to play hard going the rest of the way forward and see what we can do, and make some noise.”